‘Wales’ rarest mammal is back’ is what is now proudly portrayed on the wall of our brand-new Pine Marten Den, and I don’t think I was the only member of the Pine Marten Recovery Project team who felt a little teary reading it. It’s been a long and stressful three years, interspaced with the most amazing moments. But with the population now firmly established and slowly beginning to expand, both in numbers and range we really have something to celebrate.

This interpretation den, officially opened on 11th June, is a joint venture between ourselves and the Rheidol Railway, funded by the Rob Strachan Memorial Fund and Cefn Croes Windfarm Community Trust, with the aim to bring a wider awareness of pine martens to visiting tourists and to give the local community a visible hub in which they can report sightings and learn the latest updates on the martens. The beautiful illustrations were by Shelly Perkins Illustration and the panels were built and installed by Blitz Media. 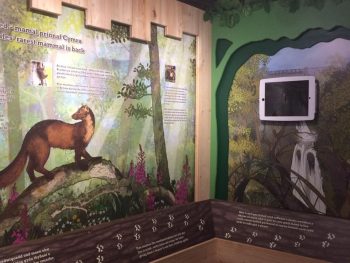 Part of the inside of the pine marten den. Photo: ©Josie Bridges 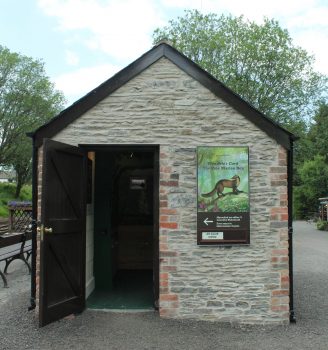 As part of the den we have created two ‘pine marten trails’ where, starting at the station, visitors can follow our map and take a walk through the woodland and spots signs of our now established pine marten population. A few weeks prior to the opening myself, field assistant Ali and volunteer Elliot did a recce of the longer ‘Rheidol’ trail.

This trail starts at the station and runs along the ‘Borth-Devil’s bridge’ footpath. It has a short section along the road before turning onto the unassuming footpath just at the edge of the village. It then crosses through a couple of fields before starting its steep craggy descent into the Rheidol valley. Even before entering the large sections of woodland deep in the valley we had already spotted some pine marten friendly cavities nestled in the trees lining the edge of the footpath. Typically, pine martens den in places above the ground as it offers them protection from predators such as foxes, and they are well adapted to their life above the ground with their long tails for balance and semi-retractable claws.

As we dropped further into the valley we entered a large coupe of noble fir trees and here (whilst watching our feet to prevent tripping on the steep slope) we spotted our first pine marten scat of the walk! It was found, as most marten scats are, proudly deposited in the centre of the path. Solitary martens use their scats to communicate with other martens and other species without having to come face to face with them. It can tell whether the other marten is a male or female and what breeding condition it is in. It can also tell an eagle-eyed human (who doesn’t mind getting up close and personal with it) what the marten has been eating. Martens are omnivorous and so eat a huge variety of things that changes with the seasons. In the late summer and early autumn scats are normally filled with bilberry, blackberry and rowan berry, which can give the scats exciting blue or red colour. And in late spring/early summer the scats are filled with delicate feather quills and the iridescent casings from Dor and Ground beetles. The scat we found, classic of late winter, was very dark with twisted fur and the tiny jagged teeth of the voles which make up 40% of a marten’s yearly diet. 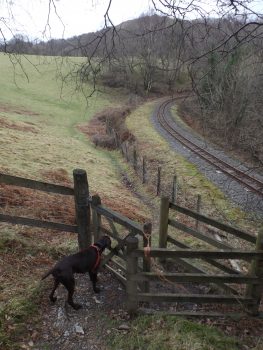 A section of the trail running alongside the Rheidol railway. Photo: ©Josie Bridges

We continued along the path into the Wildlife Trust’s National Nature Reserve (NNR) and the environment transitioned into dense Bilberry shrubs lining the sides of the path and Rowan and small Oak and Beech trees beyond those. Martens (despite being referred to as ‘Pine’ martens) actually prefer a mixed woodland, with a variety of species. Larger and older Spruce, Beech and Oak trees provide the vital denning spots for martens to rest in whilst the younger, smaller Rowan trees and areas of cleared forestry provide excellent hunting grounds for voles. Sure enough, along this section of the path we saw another two scats, one old and disintegrating and one much fresher with the distinctive sweet musky marten scent. 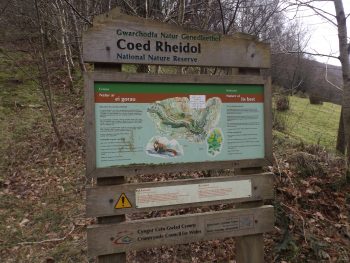 At the edge of the NNR the path splits and if you carry straight on the path will lead you down to the footbridge which spans the Rheidol. The left path turns and winds steeply upwards towards Rhiwfron Station. This is a short but steep climb and the views at the top are incredibly rewarding! As we waited for our train to return us to Aberystwyth, we tucked in to some of the bilberries we had collected along the way before signalling to the driver as the train approached. 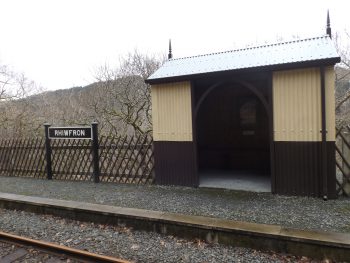 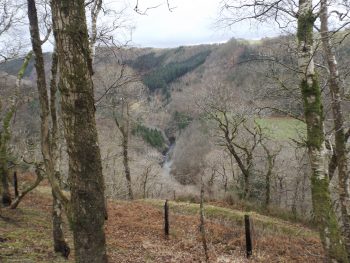 The view from the top. Photo: ©Josie Bridges

The Rheidol den is now fully open and waiting for you to visit, so pop in and report a sighting, pick up a leaflet or just enjoy some of the fabulous footage of our pine martens!