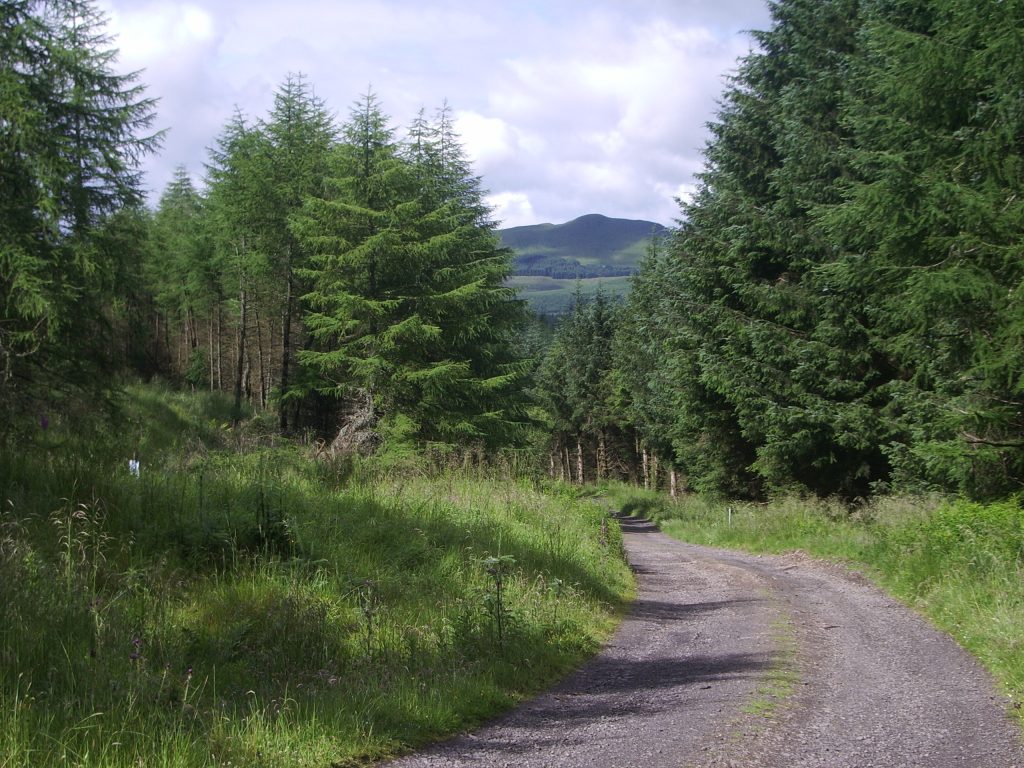 It’s day seven of my quest, I’m on the first transect of the day and I am about to check how much more rain is needed before I can use the word diluvian. The Scottish Highlands is my backdrop, and I’m sniffing poo. I’m told the aroma is akin to that of parma violets. I’ve never been a big fan of parma violets so I’m rather relieved when it is clear that what I am holding between two lolly sticks smells more like – well it’s difficult to explain – just more like pine marten. To me, a marten scat is musky and sweet. The sweetness escalates with a diet heavy on ripe fruit, but at this time of year I am looking for signs of a more carnivorous meal deal – fur, feathers or the delicate bone fragments of field voles. Quite bizarrely, a fellow scatologist had the day before come across a scat full of chewing gum. At least this backs up the oft repeated phrase that pine martens are opportunistic feeders.

I do need to use all my field identification skills here – is this pine marten or is it fox? Fox droppings can wrong foot the best scatologist. I’m positive: this one is pine marten. A marten is about the size of a domestic cat so think cat poo size or smaller when it comes to droppings. The scats are dark, sometimes black, cylindrical and variously curled. Martens have a curious custom of hip wiggling while scatting, and as a result if you collect enough scats you may end up with a complete set of the letters of the alphabet.

Woodland paths or tracks are a favourite toilet location. Such territorial marking makes finding marten scats relatively easy in contrast to the lavatorial preferences of some of its mustelid cousins – try looking for polecat poo. I say easy but only when martens are abundant. Where martens are scarce you have no chance: until the recent reinforcement of the Welsh pine marten population with martens from Scotland, only a couple of scats had been recorded there in 20 years. Well, if you haven’t got any neighbours, why mark your territory? I put the scat in a plastic bag and move on, confident of my find. It is fresh so I should get a good DNA result, it smells of marten, it looks like marten and it was found on the edge of a woodland track. 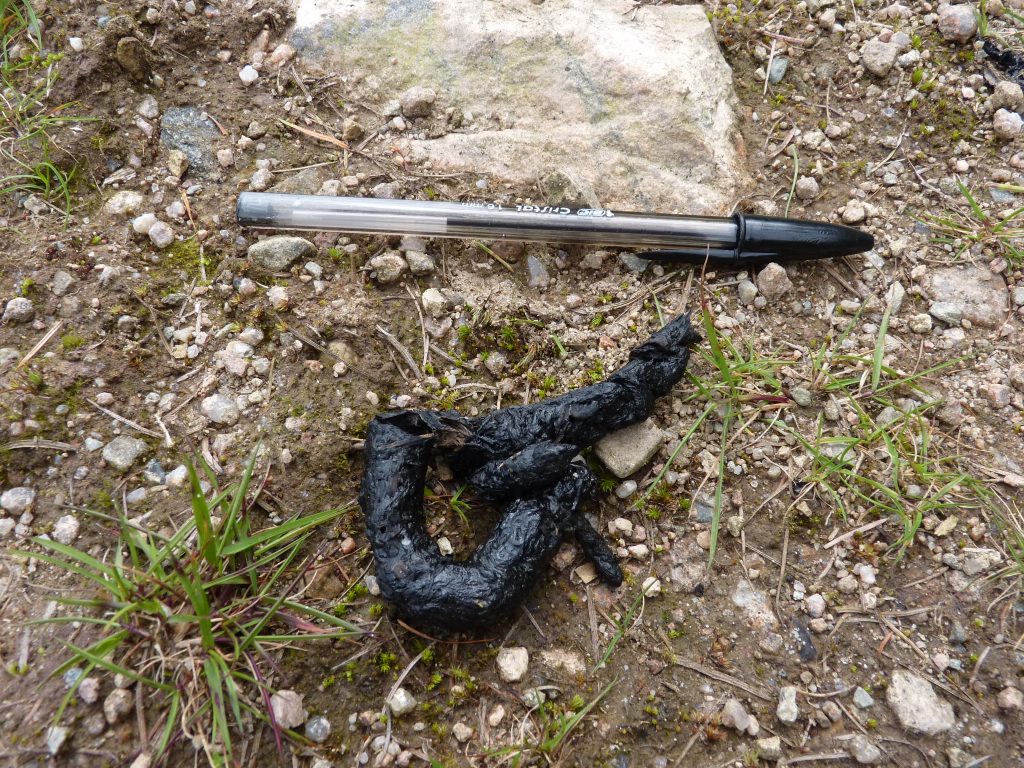 I have spent a week in some of the most strikingly beautiful parts of Scotland looking for signs of pine marten as my contribution to The Vincent Wildlife Trust’s Pine Marten Recovery Project, of which the People’s Trust for Endangered Species (PTES) is a major partner. It is an ambitious project to bring the pine marten back from the brink in Wales, using martens translocated from Scotland. I’m here in early March because this is when the marten population is at its annual low prior to breeding taking place, and surveying at this time of year allows the Trust to make conservative estimates of the number of pine martens at each site. Genetic analysis of the scats found will identify their individual ‘fingerprint’, and this will indicate the minimum number of pine martens in each forest. Armed with this information, the Trust will know how many martens it is safe to remove from each forest for the next autumn relocation to Wales.

The pine marten is a success story in Scotland, in marked contrast to the situation south of the border where human behaviour has really shown it the door. It is this success in Scotland, together with support from Forestry Commission Scotland and Scottish Natural Heritage, that has allowed the reinforcement of the marten population in Wales to go ahead, and things are looking bright for this native Welsh mammal. The Scottish martens already resident in Wales are doing well, radio-tracked daily by committed Trust staff and local volunteers who are seemingly oblivious to the unsociable hours and often unsociable weather. The Trust has relocated 39 animals in total over two years, and according to my expert (but cautious) colleagues there is an ‘acceptable probability’ that this number should result in a self-sustaining marten population in Wales.

To play my small part in this landmark venture is a real privilege – although right now I rather wish I worked for the Forestry Commission, manager of the forest I am currently surveying. For me there is a real sense of place here: the remoteness, the sheer beauty of the mountains, often stark but always inviting, and the richness of the wildlife around me: often elusive but always present. Imagine getting up each morning to work in some of the most jaw dropping landscapes in Britain: from the ancient Caledonian pinewoods to the luxuriant western oakwoods. I make a mental note to suggest we open a VWT office in Fort William. I also make a mental note to forget the recent conversation I had with a forestry ranger about their need for tick-proof clothing.

Today I left early, and, as every day, I crossed my fingers in the hope that I would be rewarded for my commitment to the cause of marten conservation. Thrilling though it is to come across a tidy pile of faeces nestling neatly on a path-side boulder, perhaps today I would actually see a pine marten and not just field signs. My morning had started with the usual daily map folding battle – why are transects always on the fold? I had parked just off the road close to a clearly little-used and barely passable footpath, realising that wearing my new high performance hard shell was not my best decision of the day – but too vain to have packed the old thornproof Barbour. And then I saw it – there in the distance the chestnut fur setting off a flamboyant apricot bib, and the characteristic heart-shaped face that gives such an endearing quality to this masterful killer. It was unmistakable. It was achingly beautiful. It was dead. I picked up the animal, still warm, from the middle of the road and placed it gently on the verge. I did this as a warning to other martens who might take their chance crossing this busy route north – a pointless gesture I know. I was quietly relieved that it was a male: it is too unbearable to think of it being a mother about to give birth.

My second transect of the day proves to be more of a challenge: unlike my first path, which was at least passable with a bit of bashing and slashing, here the path on the map no longer exists. With GPS in hand I plough my way through a dense cover of young conifers, clearly planted since my map was printed. Despite their name, pine martens are not particularly fond of pine trees, and neither am I right now. Martens will use conifer plantations if there is a well-stocked larder, but like to make their dens in tree holes – and you don’t find many of those in trunks barely the size of a telegraph pole. ‘Old growth’ woodland with mature trees and tree cavities is far more appealing. I decide that this transect is a lost cause.

I post all the scats I have collected so far. They will be genetically tested, and if I’m right will help the Trust estimate the number of pine martens living in this potential donor woodland. I stand in the queue hoping the lady behind the counter does not ask me what’s in the envelope, or worse why it smells. As a precaution, to mask any odour seeping from the package, I open a pack of parma violets purchased in a shop down the road and eat one.

An abridged version of this blog can be read in Issue 11 of PTES’s Magazine Wildlife World.