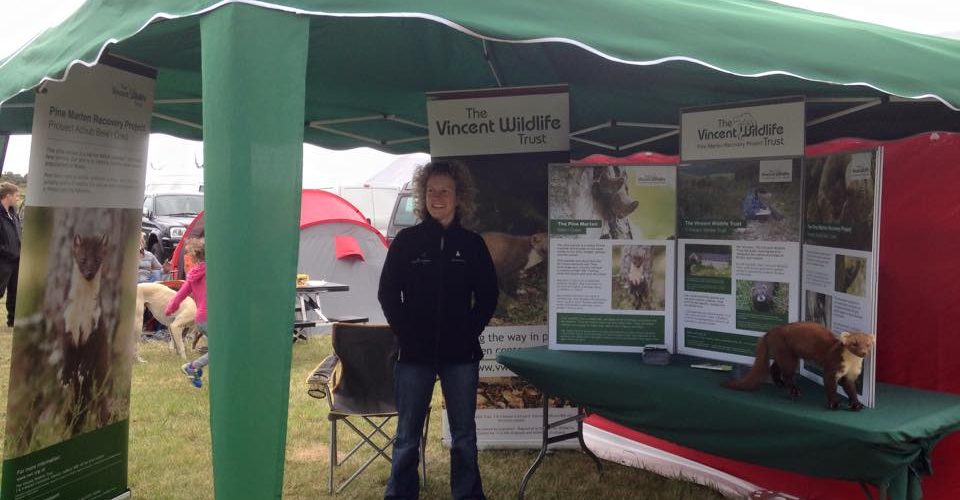 June was a breakthrough month for the Pine Marten Recovery Project. We have always been committed to being as open and transparent with our plans as possible, and have sought to involve and inform the communities in our proposed release areas from the very beginning, so as to avoid any perception of surprise or exclusion. We were disappointed therefore with the low turnout for our community meetings in April, which I touched on in the previous blog. The discussion and feedback from these meetings was excellent, but we felt the meetings were not as representative as they could have been, particularly of the farming community, which represents the traditional heart of rural Wales.

We were delighted therefore to collaborate with the National Farmers Union Cymru and the Farmers’ Union Wales in organising a further meeting specifically for land users in our main area of work. Some concerns had been raised by some NFU and FUW members regarding the proposed  marten translocation and we were all keen to address these and come to a resolution on how to move forward with the project, and ensure it works for everyone.

So it was that foresters, farmers, representatives of NFU and FUW, and VWT staff gathered in Devil’s Bridge midway through June to discuss the recovery project. Huw Denman and I gave a presentation detailing pine marten ecology, their cultural and ecological history in Wales, their role as a key native carnivore, and their potential benefits to the rural economies of mid Wales. For once, we gave ourselves full remit to speak from the heart – a rarity for scientists!  Huw, a native Welshman, was eloquent and persuasive in communicating the pine marten’s ancient association with human culture in Wales: from poems to pelts, and place names to historical pursuits.

There were some entirely understandable concerns raised from the floor and proposed by NFU Regional Chairman Wyn Evans. Will pine martens predate lambs? Will they impact local pheasant shoots, incurring an economic impact on the owner and syndicate members? Will there be a TB risk – pine martens are a Mustelid, as are badgers, and how much monitoring of the released animals will there be?

We discussed all these points, emphasising that we are developing a mitigation strategy, and most of the concerns raised had been flagged up and addressed in the plan. There was obvious concern for the safety of lambs but we have never found evidence of martens preying on lambs   and think it extremely unlikely to occur; pine martens are shy, risk averse woodland animals, and are vulnerable to predation out in the open. After discussion, we agreed to incorporate a compensation fund into the plan to reimburse livestock losses where it was certainly a pine marten at fault, which would involve assessment and valuation of the case by an independent authority (as is done in TB cases). We were also able to demonstrate the tried and tested methods developed by the VWT to prevent predation of game birds in holding pens, and agreed to provide advice and financial assistance in specific cases. We also agreed that in the future, we would be open to discussions regarding licences to remove problem animals, either via translocation or lethal control. It was acknowledged that the re-evaluation of the protected status of the pine marten may be required, should the population thrive in the future, with a concomitant increase in human/marten conflict.

TB was discussed, and we were able to demonstrate that our disease risk analysis, conducted by wildlife veterinary experts and discussed with Welsh veterinary officers, had been thorough. The report concluded that there was a negligible risk of increasing the instance of TB in cattle in Wales, and this negligible risk could only be counted as a risk on the assumption that there was a possibility that pine martens could pick up and harbour TB from badgers; pine martens are not currently known to harbour TB. It was pointed out that if polecats (also a Mustelid), which are often closely associated with farms, have not become a vector of TB, then it was very unlikely that pine martens would.

In a more general vein, there were concerns for local wildlife, and that the project was the start of further reintroduction work involving ever more controversial species. The second point we were able to refute hands down; we are reinforcing a tiny, endangered population, not reintroducing a species that has been absent for a prolonged period of time. We discussed at length the potential interactions and impacts on other native species and demonstrated from published research that pine martens were not bird or egg specialists, but generalists; feeding on what is locally abundant – field voles, berries, insects. They will predate some bird species, but these tend to be common woodland birds, and the predation is opportunistic. They will compete with other predatory species, to the benefit of uncommon wildlife. Rare birds are unlikely to be endangered by virtue of their rarity, and the fact that pine martens have large home ranges – the chance of them encountering each other is very low. It was unanimously agreed that if pine martens had a negative impact on grey squirrels, which is what evidence from Ireland, and anecdotal accounts from Scotland suggest, then this would be to the net benefit of native biodiversity. It was also well received that the project could provide funding streams via Glastir Advanced through the erection of den boxes, tree planting, and woodland management, and the VWT would help facilitate this.

The evening’s discussions ended passionately with a plea to the audience – why couldn’t Wales replicate the success that Scotland experiences due to its native wildlife? Tourism in Scotland is the second most profitable industry after Whisky export, and wildlife tourism contributes £67 million to the economy every year. In a few years, people could come to Wales on wildlife watching holidays to see iconic species such as bottlenose dolphin, osprey, chough…and pine martens in mid Wales. It was voiced that the project represented a huge opportunity for local people, farmers, foresters, and the farming unions to back the project, and demonstrate their pro-wildlife stance.

There were handshakes at the end of the night, and a shared sense that the right decisions had been reached. All parties were satisfied after the issues had been thrashed out, and most importantly, we had achieved the backing of the people that matter the most to the success of the project – the community members and stakeholders that share the landscape with Wales’ most rare and charismatic mammal.

Special thanks to Rhys Davies, Agent and NFU Group Secretary, Wyn Evans, NFU Cymru Regional Chairman, and Caryl Wyn Jones, County Executive Officer of the FUW for facilitating the event, and Arwel Jones of Bangor University for chairing the discussions.