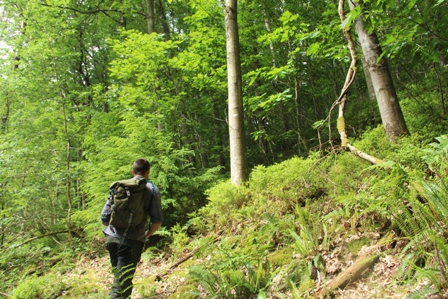 The Vincent Wildlife Trust’s work with pine martens has been almost continual over the last three decades, spanning the entire UK, Ireland and parts of mainland Europe. It has been building up in scale and sophistication, and has resulted in the conception of our current focus –a Pine Marten Recovery Project (PMRP).

A steady stream of research, observation, field work and expert opinion culminated last year in the completion of a peer reviewed feasibility study, conducted by Dr Jenny Macpherson and the VWT team, investigating the potential for re-establishing the pine marten population in southern Britain. The study laid down a solid foundation from which we have launched the recovery project, the ultimate aim of which is to restore the pine marten to parts of its former range in southern England and Wales, where still appropriate. Part of the feasibility study involved modelling the location of suitable marten habitat in Britain, using data on pine marten presence from surveys in Scotland and Ireland. The model highlighted that Wales has ample suitable habitat, running roughly north to south down the spine of the Cambrian mountain chain, from Snowdonia in the north down to the Brecon Beacons in the south – connecting Wales’ two flagship national parks. Subject to further analysis which, significantly, took road density into account, a recovery area was designated in mid Wales.

Martens are an adaptable species, but they do have certain requirements that need to be fulfilled in order for them thrive. Food, protective cover, denning sites, and connectivity between forest patches is crucial.  This is what I set out to establish, aiming to exhaustively cover our release sites, surveying some four hundred plus sample plots. This is currently my main focus, and although not yet finished, there have been some interesting interpretations to come from the initial phase of surveys. Whilst licences are being applied for, home office course are being attended, and meetings are being organised, I have been spending time ground truthing the results of our habitat modelling. It is one thing to feed some data into a computer, which provides a coarse map of potentially suitable habitat, but we need to confirm the results in order to have confidence that the areas we have selected are in fact capable of supporting a self-sustaining population of pine martens.

One: it has been a bumper coning year for sitka spruce, which is good news for crossbills. I have never seen or heard so many in Welsh upland forest!

Two: it is also a peak year for rodents, probably a result of the warm summer and autumn and the bumper fruit crop that followed. This in turn has been excellent for predators in general, but especially raptors – it is encouraging to see kestrels and hear of nesting barn owls in areas where they have been having a hard time of late. The snow this week will have given the voles a reprieve; not only does it protect them from predation, but provides thermal insulation from the cold air – just like an igloo!

Three: what at first glance appears to be a featureless monoculture of sitka spruce can be deceptive. The sample plots are numerous and randomly sited, which means that almost every type of habitat within the forests is represented. Inevitably, a proportion of the sites are characterised by dense spruce, with no light penetration and a dense carpet of needle litter and twigs, but this, to my great joy, has been a relatively small proportion.

The forests are a patchwork of different age cohorts (mainly sitka spruce, but also lodgepole pine, Norway spruce, larch, western hemlock, Douglas fir, noble fir and the occasional Scots pine), with open areas cut in as access tracks, forest rides, and streams. In these open parts where light is plentiful, willow (mainly goat willow, Salix caprea), oak, rowan, alder, beech, bird cherry, ash and hazel can take root – never all together but all patchily present in the forest. Rosebay willowherb flanks the track sides and competes with bramble thickets in the guts and ditches. The ground cover in the forest interstices is a variable heath of bilberry, cowberry, heathers, soft rush, mosses and grasses (usually wavy hair grass and molinia tussocks, the walker’s bane!). The ground flora under mature spruce (20m+), which has made up a large proportion of the plots so far, is usually dominated by mosses –polytrichum, dicranium and hylocomium splendens being most abundant -with carpets of sphagnum in the wetter areas. Heath bedstraw, wood sorrel, common heather, bramble and/or bilberry usually contribute significantly to the ground flora in drier patches. The percentage ground cover of fruiting shrubs is one of the key measurements in the plots (very important for pine martens in the autumn), and it has been very encouraging to find, so far, that two thirds of the plots have some fruiting shrubs present, and approx. 40% have more than 25% coverage. This is not only good news for martens, but also invertebrates, rodents and birds. It is also good news for roe deer, which are creeping back into the forests of mid Wales – a natural recolonisation to celebrate. Also encouraging is that half the plots surveyed have coarse woody debris with trunks or stems over 7cm in diameter. This adds to the three dimensionality of the forest, which is exactly what pine martens have evolved to exploit.

The very nature of the Welsh landscape also adds variety and complexity to the forests – crags, quarries, deep river gullies, little mountains within the mountains – this all creates a landscape which is eminently suitable for pine martens. Also, the land outside of the forest is regenerating. The heath above and between the forests, that often form the connective tissue between them, is lush with vegetation where grazing has been reduced (not stopped, but reduced), and dotted with rowan, birch, willow and hawthorn, as well as naturally regenerating spruce. It is a landscape rich in field voles, and in the snow last week I saw the tracks of fox, brown hare and polecat. My only concern from the woodland surveys so far is the lack of arboreal denning opportunities. Plantation conifers and young broadleaf trees simply do not offer the cavities that pine martens prefer. They will find alternative sites, but in the meantime we will have to employ many more of our den boxes to provide safe refuges above the ground.

It has been an encouraging start to the surveys and I look forward to producing the results, which should go some way to consolidating our view that mid Wales is not only ready and waiting for a viable population of pine martens but crying out for one!