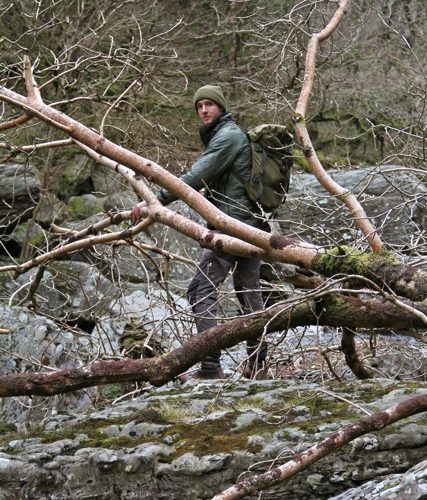 February picked up where January left off. For me, this meant more time conducting woodland surveys – when the snow eased up at least. I was covering locations in the forest above Devil’s Bridge in the Arch, and established that the two most diverse parts of the forest are associated with the two river arteries – Afon Merin and Afon Rhyddnant. This is no great surprise as rivers provide corridors of (generally) deciduous growth and thicker ground cover up into the uplands. The rivers that flow out of the arch are flanked with lush carpets of greater woodrush, bilberry, heather (Calluna vulgaris & Erica tetralix), with silver birch, rowan, willow sp, and conifer regen dotted naturally around the flat valley bottoms carrying the rivers. Otter spraint was found both on the Merin and Rhyddnant, and as the month progressed, the spring bird song (and woodpecker drumming) betrayed all the common bird species one would expect to find in woodland, with the exception of our migrants which have yet to turn up. My highlight for the month was seeing my first Welsh roe deer! I had seen droppings shortly before the sighting halfway up one of the tributaries of the Merin, and when climbing through the heath and young spruce to the top of the rill, got an extremely brief glimpse of the deer as it darted into thicker woodland. Wonderful. I also heard the call of red grouse on the upper shoulder of the valley ascending north from Blaen Maherin, and watched as a pair of kestrel made easy hunting of field voles on the fringes of the heath above the cwm. There was some significant clear-felling in process, which made me wince. Sometimes it can be a challenge to bear in mind that it is better in the long run (in the majority of cases) to clear the hills of low value, poor quality conifer, and allow it to be replaced by successional broadleaf, or revert to heath, which is much, much more diverse and rich in wildlife than the sitka plantation it replaces.

Another tranche of work completed in February was the approach and engagement of the landowners that own or work land adjacent to our proposed year one release site. This was, and is, incredibly important to us – for such a seminal, high profile piece of work, we want to take a fundamentally grass-roots approach in engaging the communities we will be working in, and ultimately becoming part of. It is important to us that we have the trust and respect of the local people, and the worst thing that could happen would be for people to find out what we are doing from an external media source; who are these people bringing pine martens into our area? Why has no one let us know? We place a lot of value in local knowledge and expertise, and building working relationships through face to face contact. I had no idea how our work would be received, but at least the people we spoke to would be able to put a face to the work and have a contact for questions. Huw Denman, with whom we often collaborate, joined me on these visits, lending the benefits of his considerable experience working in forestry and conservation, and an intimate, nuanced understanding of rural welsh culture accrued from a life immersed in the Welsh landscape. More practically, he made up for my lack of Welsh language!

The visits were overwhelmingly positive, and any reservations I initially had were unjustified. The majority of farmers we spoke to were friendly and supportive of the project, welcoming the work to re-establish an endangered native. At one farm, we blundered onto the set for an episode of the ‘Hinterland’ series, and I was momentarily alarmed to see a number of polecats hanging from a gamekeepers gibbet… I was saved the awkwardness of pointing out to the farmer that polecats were a protected species by the props coordinator, who had defrosted some museum specimens for the shoot! Incidentally, the same farmer, who had a good knowledge of wildlife, told us that he had seen two red squirrels in Ysbyty Cynfan a few months before when he was fishing the river – very rare, if accurate.

A few sheep farmers had concerns for their lambs, but these were quelled once we explained the nature and ecology of the pine marten. Those that kept poultry were pragmatic – predation of hens and their eggs was just part and parcel of keeping birds in a relatively wild part of the countryside. Those that could effectively protect their birds from the interests of fox, polecat, goshawk, badger and stoat, would have no problems from pine martens. Those who took a more ‘hands off’ approach to husbandry accepted, as mentioned, that predation was par for the course in the wild valleys close to forest. Fortunately, there are no commercial poultry operations in our release area. There is one commercial pheasant shoot in the release zone, but the proprietor was well-informed, and a supporter of native wildlife – even if he did lose some poults to predation. It’s a price he was willing to pay to operate in such a beautiful place.

The other work of note in February was our polecat trapping surveys, which were conducted to a) get a handle on polecat activity in our pine marten release sites and glean some genetic samples, and b) to trial a non-invasive hair tunnel. I won’t expand much on the trapping, as to put it bluntly, it was a bit of a flop! No polecats were trapped, though we do have some (currently unverified) hair samples from the tunnels for analysis. We have had polecats reported from the site, and the habitat is suitable. Bafflingly, polecats seem easier to trap when you are not trying, or trying for another species! I can only speculate as to why we did not catch any. We will be trying again soon up at the Arch. Still, it was a good opportunity to get volunteers involved, and to show them the techniques we use.

I am writing this from Scotland where we are conducting surveys to assess the population status of our proposed donor sites – still, that is another blog for another month. Next month in fact, and courtesy of Lizzie!