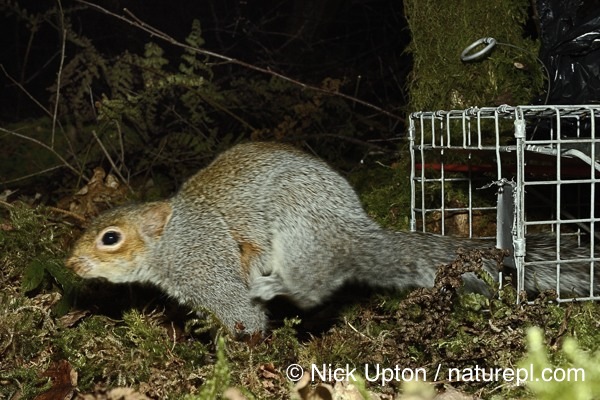 I am now over halfway into my PhD looking at the impact of the native pine marten on invasive grey squirrel populations. Working alongside the Pine Marten Recovery Project team in Wales, I am tracking and observing grey squirrels to try to understand their response, if any, to the presence of pine martens.

My introduction to these species really was a baptism of fire. Thrown in at the deep end, I started the fieldwork on this project only a month after starting my PhD. Learning how to catch, collar, tag and track feisty grey rodents is no mean feat. Coupled with a continually wet and windy autumn and winter in mid-Wales, this really was a test of my resilience. I seemed to face adversity at every turn. If the weather wasn’t against me, the wildlife was, and I was often faced with equipment failure or low squirrel trapping success. However, my hard work and persistence paid off. I finished my first field season (three months later than expected) with a large and promising data set, documenting the movement of grey squirrels during and after our pine marten releases.

Since the end of my first field season in Wales, I have been kept very busy. Not only processing data but collecting potential pine marten prey samples from all of our marten trapping sites in Scotland. I spent a damp and very midgey fortnight in the Scottish Highlands trapping small mammals and collecting road kill. These samples will contribute to my pine marten dietary studies to help us understand if, and how, the animals’ diet changes after translocation. I was fortunate enough to see my first wild Scottish pine marten here, and for all we know, it may have been one that was then caught and translocated later in the Autumn!

The second wave of pine martens arriving in Wales signalled the official start of my 2016 field season. Repeating the work I had done in 2015, I hoped to add to the already sizeable dataset I had collected. The aim of this particular study is to reveal any spatial responses of the squirrels to the presence of a ‘novel’ predator. The experience I gained from my first year of field work enabled this season to run much more smoothly. Enhanced not only by my new field assistant by the name of Buttons but the uncharacteristically dry autumnal weather!

As trapping began, I was feeling slightly doubtful that I would capture as many squirrels as the previous year. There seemed to be little activity around the traps and all I was detecting were mice and slugs. However, happily I was proven wrong when in the first week I caught my target number of squirrels…and a rather peeved-looking pine marten. Nothing like trapping a pine marten to confirm their presence in the woodland! My trapping regime trundled on with very few hitches, excluding the occasional car rally, felling operation or broken toe. This year, trap by-catch continued to surprise me: from polecats to pine martens, hedgehogs to hares and rats to robins. Surrounded by such beautiful scenery, with dry feet and a mountain of data, leaving wintery Wales for a warm office is bitter-sweet.

However, work continues on my return to the ESI at the University of Exeter in Cornwall. Another aspect of my work is to investigate the change in pine marten diet as a result of translocation. The VWT team and I have been working hard to collect pine marten diet samples in both Scotland and in Wales, providing us with freezers full of interesting animals and scats. No doubt these samples will keep me busy in the lab over the winter months.