It doesn’t seem like five minutes since the pine marten team stood in the dark on a drizzly September morning welcoming the first translocated martens onto Welsh soil. Since then the project has zoomed along at what seems like an incredible rate, hitting all the milestones we hoped it would: releases, sightings by the public, first kits, grey squirrel predation.

All of the martens that came down to Wales were given nicknames by the team, normally by the people who drove them down at 3am, so some of them are questionable… However, mostly they were referred to by their numbers (because our sleep deprived brains kept mixing up the names!) Miss Piggy, however, was one marten that truly lived up to her name and so it well and truly stuck!

Miss Piggy was brought down from Scotland along with another female (PM06 – Fiona) and a male (PM08 – Dai). We had only caught one male and no females the week before so we were anxious to make up the numbers this week. We were very relieved to see two gorgeous girls in the traps, along with big old bruiser Dai. All three were driven down from Scotland overnight, which is how PM07 received her unusual name. Every three hours the van transporting them stops to offer the martens water and blueberries and whilst some of the animals can be very wary of people and will only eat once you have left, Miss P showed no such qualms! She snaffled everything she was offered and didn’t seem at all bothered by her strange surroundings.

Early in the morning she was released into her pen (which had been built a few days prior with the help of Chester Zoo) and promptly snuggled up in her den box to sleep off the feast she had consumed enroute.

We have cameras in each pen to monitor the behaviour of the martens, to assess whether they are stressed and if they are eating regularly. Most of our animals would have a period where they would hide in their box and would wait until they had the cover of darkness to come out and explore their pen and eat the food. Miss Piggy had no such reservations and was out and about within a few hours hunting out all the tasty treats we had left in her pen.

Around six days after she arrived in Wales, the door to her pen was opened and she took her first steps out into the Welsh wild. This was the first time we’d managed to capture this moment on film – in the previous two weeks previous we had unfortunately suffered a lot of technology failures, so it was a lovely moment.

The idea of using these pens was so that the animals could return to them after they were released for food or safe shelter and build up their territory around it, but up until Miss Piggy all of our animals had left the pen and never returned. Miss P, being her lovely obliging self, returned to the pen quite often to sleep and to hoover up all the supplementary food we put out. This led to adorable videos like the one below where she desperately tried to cram all of the food in her mouth in one trip, before accepting she would just have to come back several times to carry it all away.

November hailed the end of our translocations for the first year. Twenty animals safely released into Wales! Miss Piggy continued to be the only animal to return to her pen up until the final week of releases. The last two animals were released along the same river and not far from where Miss Piggy had set up her territory, and when they left their pens we continued to put out food as we had for all the animals, with little hope that they would eat it. However, amazingly all the food had gone each day! Hurrah, we thought. Two more animals that will be easy to keep track of! When we checked the cameras we had on the pens though all we saw was one very chubby little Piggy going to both the pens (and her own!) in the same night and carrying off all the food. In one night she managed to sneak away six chicks, six eggs, mouthfuls of blueberries and grapes covered in honey, as well as all the peanuts she could gobble along the way! Pine martens are opportunistic and although she wouldn’t have eaten all of that on the night, she will have taken it all to be stored away for a rainy day. Needless to say we stopped baiting all three pens after that revelation!

Throughout the following months we continued to put food out in front of a camera for Miss Piggy, even after we dismantled her pen, as it was a great way to assess her body condition (assessment: chubby!). It was these cameras that also captured her sweetest habit; Miss P is quite a small marten and therefore can struggle to carry off something as big as a chicken egg in her mouth. So ever resourceful when it comes to food she perfected the ‘Reverse egg wiggle’ where she rolls the egg away!

For most of her first three months in Wales, Miss Piggy had chosen to den in our specially designed den boxes or dense piles of brash (perfect hunting ground for voles!). By January though she decided she wanted something grander and so set up home in a secluded ‘mansion’ overlooking the river which her territory encompassed. This house is an old bothy left to rack and ruin, which when we explored looked like it was still occasionally used by campers. Miss Piggy was snoozing in the chimney breast, which was also full of twigs and other drey materials from years of squirrel use.

We also took pity on her this month and started buying Miss Piggy her own special small eggs so she finally managed to learn how to carry one away in her mouth! Not quite as endearing as the egg wiggle but no doubt much easier for her!

As the animals began to settle into their territories we spent less time desperately chasing after their radio signals and could take time to do other things without the fear of them disappearing. One of the easiest ways to assess pine marten populations is scat surveys and we wanted to know how quickly our translocated animals could be assessed through this method; so we spent a lot of this month with our eyes glued to the ground. Miss Piggy, never one to disappoint, helpfully provided us with lots of specimens along the tracks near her den, as well as liberally covering her denbox lid with plenty of scats. This is something which is thought to be typical behaviour for martens, but was the first time it had been seen in Wales!

With the other females settling down into a single den site in preparation for giving birth, Miss Piggy had the pick of den boxes and abandoned nests all over the release site, as she was too young to be pregnant this year. But all of these were spurned in favour of her favourite bothy, which she was now denning in most nights. We put up cameras to see her coming and going and to settle an argument between staff about how she got in. Was it through the missing roof tiles? Was it through the holes in the brickwork in the gable end? No. She wandered in through the back door… Of course she did.

The radio collars that were so helpful in keeping track of our martens since they arrived in Wales have a battery life of 12 months so it was soon time to think about trapping the animals to remove them. The re-trapping would also allow us to weigh the animals and take whisker samples to assess what their diet had included. It was with little debate that we decided Miss P should be the first to be trapped. She was reliable, laid back and, most importantly, willing to do anything if there was the chance of an egg!

We put 12 traps out and for a few days pre-baited them with food, before we set the traps to actually catch the animals. Once the food started disappearing from the traps we set them and Jenny (PMRP Manager) got up at 3am to check them and was rewarded with not just Miss Piggy but also PM10 and PM17! We had assumed (from her reputation!) that it was greedy Miss P eating all the trap food! Miss P, true to form, had eaten everything in her trap and was curled up and fast asleep when Jenny looked in her trap. She woke up a bit grumpy and was less than pleased about having her collar snipped off, but was soon released minus her collar (and a few whiskers!) to be truly wild in the Welsh forests.

Whilst we are no longer following our lovely Miss Piggy everyday any more, we still have a camera installed in her territory and throw some bait down whenever we pass in order to keep her in the luxury to which she is now accustomed. So far she is still doing well and is looking very smart without her collar. We’ll be trying to keep an eye on her over the next year (in between chasing after our new set of collared martens!), so we can hopefully know if she gives birth next spring.

While we, of course, can’t have favourite martens, she is definitely the one that has shown us the most personality this year, and it was a very bittersweet feeling when her collar was removed. But with any luck we can keep track of her. Here’s to the next 12 months Miss P, hopefully a year filled with the pitter patter of chubby mini piggy paws! 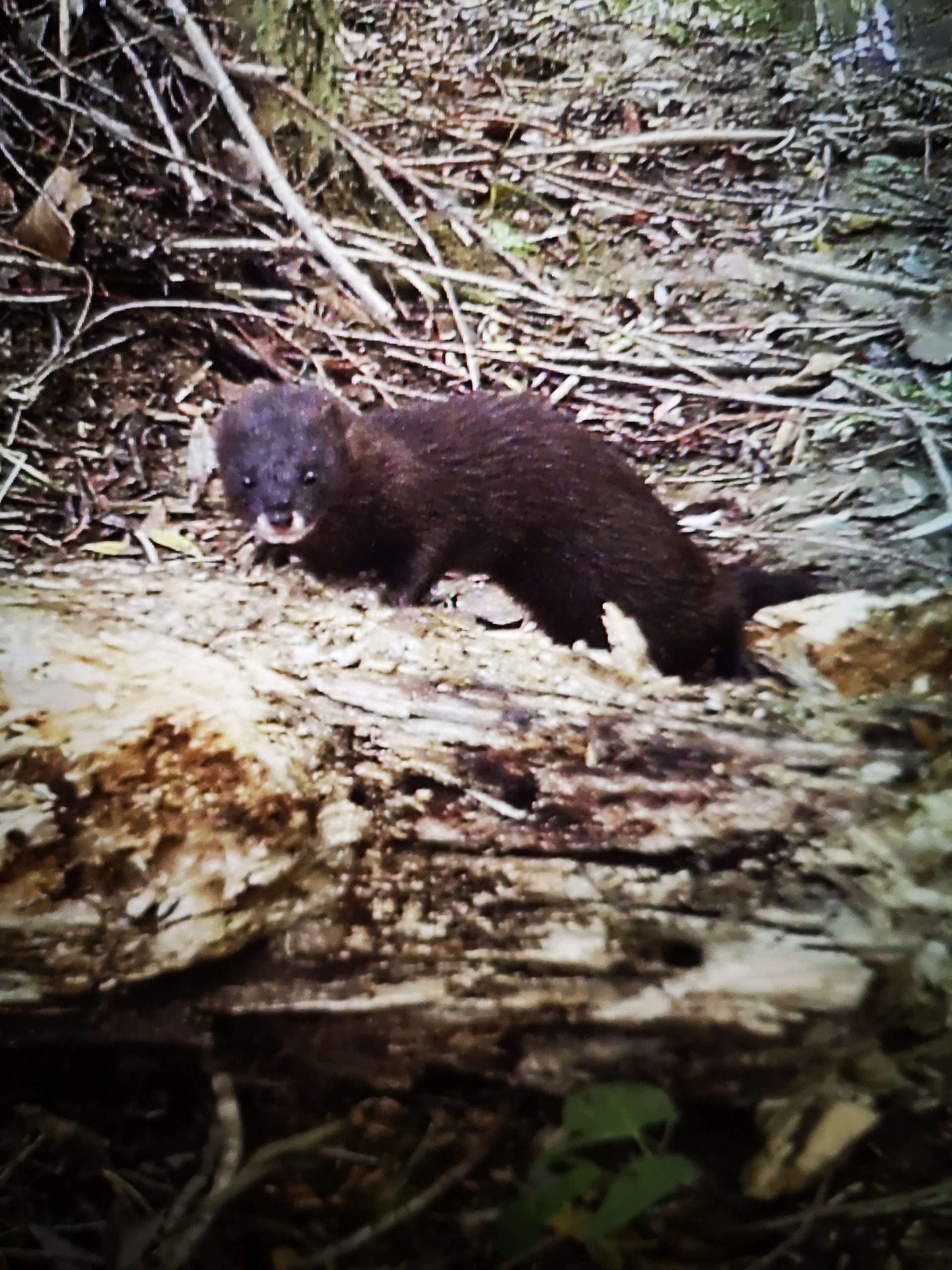 A new vision for the critically endangered European mink

The puzzle of polecats in Scotland