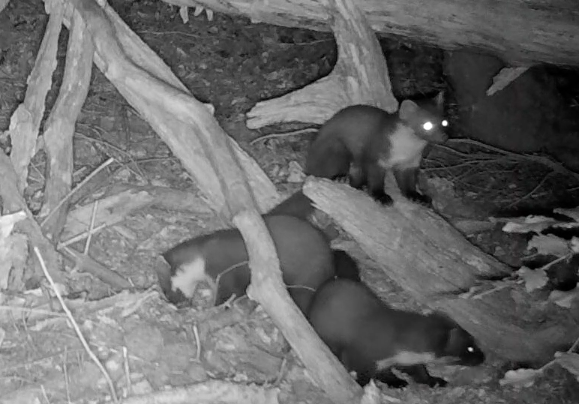 For many years my wife and I had walked regularly in local woodlands enjoying the spring carpets of bluebells, the autumn crunch of beech nuts under foot, the scamper of squirrels and the cheerful chatter of birds in the treetops. ‘I wonder if there are otters here?’ we would muse. ‘That’s a big hole – what do you think might be living there?’

Then, shortly after my retirement, we signed up for a three-day course on British Mammals: Predators and Hunters organised through Aberystwyth University. We compared the skulls of foxes and badgers, we set camera traps with frankfurters taped to rocks and we spent a long evening sat silently behind fence posts watching absolutely nothing emerge from a badger sett. One of the most engaging sessions was delivered by Josie Bridges from Vincent Wildlife Trust detailing the progress of the Pine Marten Recovery Project in Wales. We quickly signed up as volunteers to place a trail camera around our local woodlands to the west of the release site at Hafod.

Setting the camera gave a new focus to our walks. We started seeking out likely locations and leaving an egg adorned with a dollop of jam, lemon curd, marmite or peanut butter in the hope of finding the magic ingredient that would be irresistible to a pine marten. Troubles with the technology didn’t help. Batteries ran down, memory cards got corrupted and we tried various camera settings. Occasionally we would return to find the egg had been taken, but no footage of who took it.

For over a year we collected footage of foxes, badgers, hares, squirrels and lots of small rodents – but no pine martens. We learnt that it takes 7 hours 20 minutes for two field mice working tirelessly together to breach the shell of an egg. We learnt that foxes can climb trees if the angle isn’t too steep but can’t find an egg unless they stand on it. We learnt that mating squirrels like a tender word in each other’s ear after the deed. And, in moving to a variety of locations in these same woods, we also filmed owls, herons, otters, a mink and a deer.

After a year we approached Josie for new suggestions to help find the elusive pine marten – and her suggestion to fix a pierced sardine can to a tree near the camera finally brought success. In July 2019 we had our first footage of a pine marten carefully taking the egg in its mouth and sauntering away. To finally see the pine marten was a magical moment, and so uplifting to know that these lovely creatures are thriving in the woods within a mile of our home. 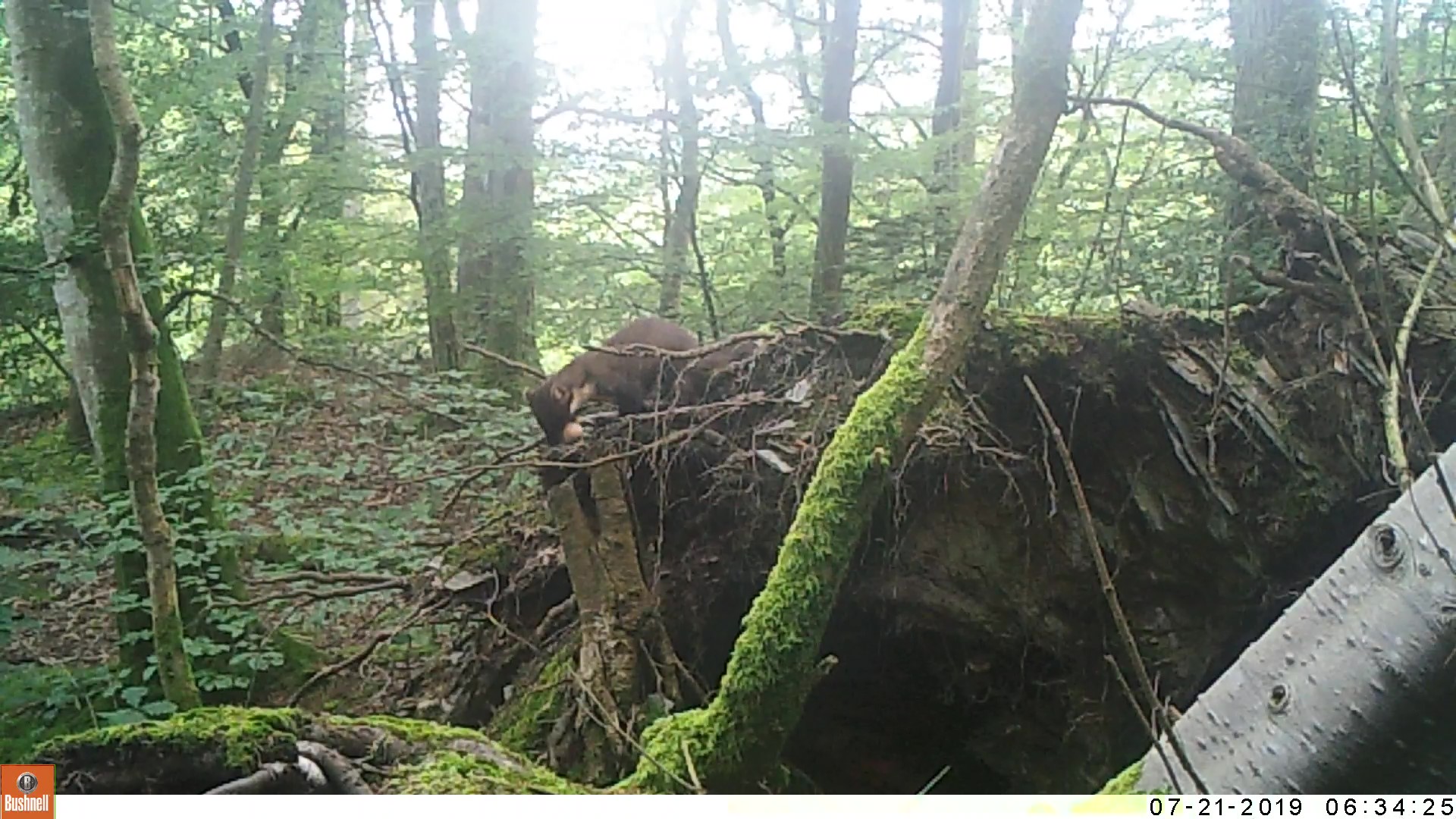 Since then, we have bought a better camera and tried various locations to determine in which of our local woodlands pine martens might be living. We now think we’ve filmed at least two different individuals, but we’ve still only filmed them at different locations within a few hundred yards of the original site – so it’s disappointing that they don’t seem to be established more widely around our area. 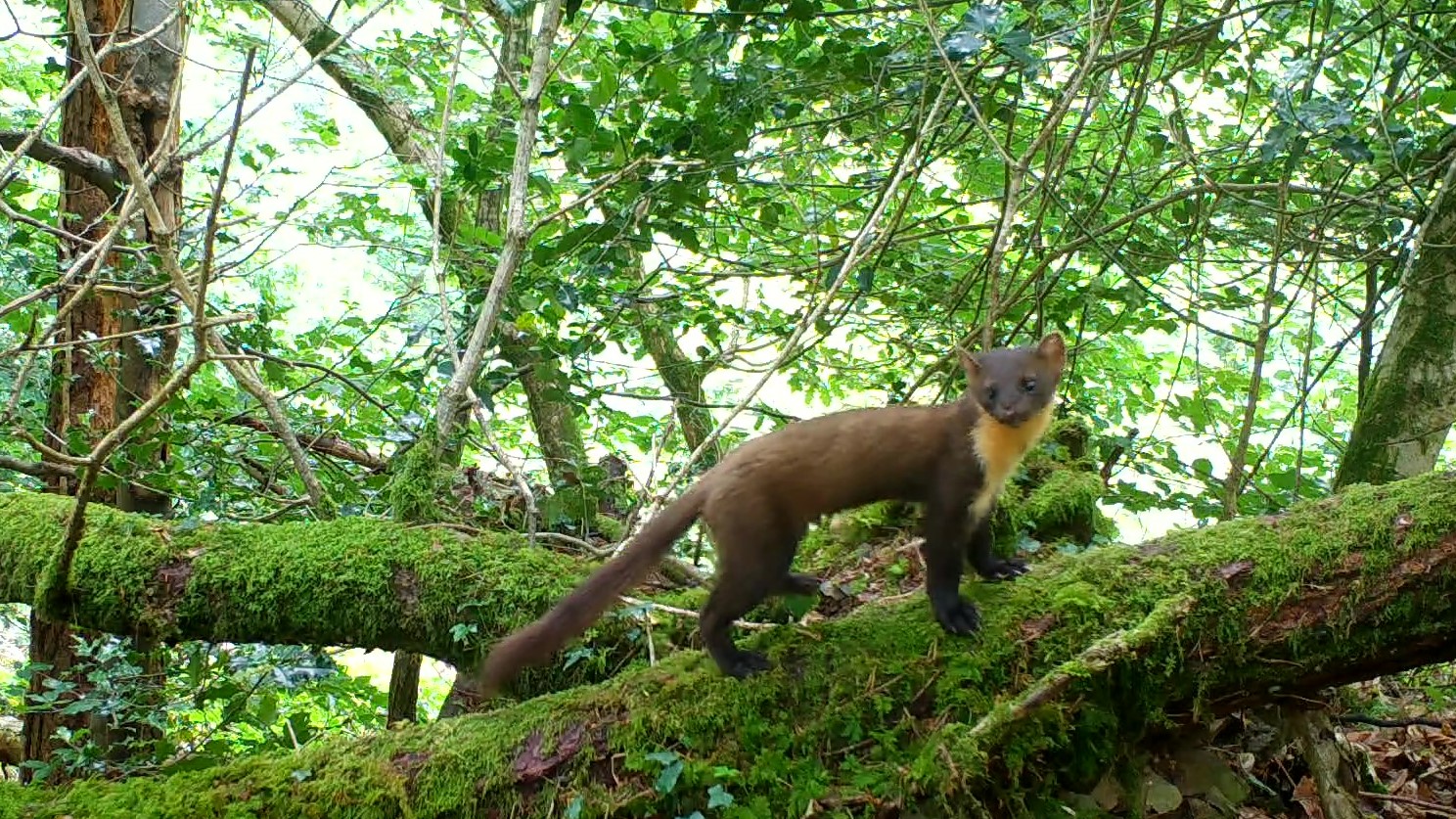 We also discovered that there’s actually a den box located near this site and we’ve recently trained a camera on that area. And that was when, on 15 April this year, our next moment of magic was recorded – some grainy footage of a pine marten climbing down the tree with a kit swinging wildly from its mouth – and then it returned 15 minutes later for a second one. Vincent Wildlife Trust tells us this was the first evidence of breeding in Wales so far this year, so it was great to feel we are contributing to the knowledge base of the project.

The raising of these kits is all the more remarkable since over the last several months there has been a great amount of tree felling in many of the woods around this area. We contacted Natural Resources Wales in this regard and they assured us that the locations of den boxes are mapped and this is taken into consideration when they are harvesting. Meanwhile, VWT has assured us that it’s quite normal behaviour for pine martens to relocate the young kits. Let’s hope the incursion of man and machinery into their habitat hasn’t unsettled them and that they will continue to entertain us via our cameras for many years to come.