Although times have been difficult over the last 18 months and we’ve all had to adapt our working lives during the COVID-19 pandemic, it’s good to see that greater horseshoe bats are still showing encouraging signs of population recovery. During July 2020, we documented record bat numbers at four of our six greater horseshoe bat nature reserves. 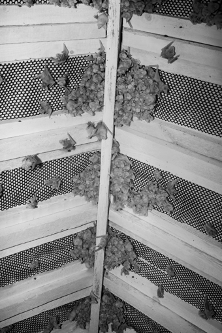 We are seeing increasing numbers of adult and juvenile bats at our nature reserves. Photo: ©Tom Kitching

So what’s next for greater horseshoes? It’s been quite clear that their numbers are increasing across Britain. We’ve seen an average annual increase of around 7% in the number of adults at our bat reserves since 2000, and across Britain this figure is around 4-5%. This is brilliant news, and you might be forgiven for thinking this species is largely out of the woods. But species recovery is a long road and it’s important that we don’t become complacent.

Despite the marked population increase, greater horseshoe bats have not recovered in some parts of their historical range across southern Britain. The longstanding national strongholds of this species are in South Wales, the West Midlands, and Southwest England, with relatively few records in the southern counties beyond the long-established roosting sites in east Dorset. Historical records show that greater horseshoes were once found across Hampshire, West Sussex, Surrey and even as far as Kent.

Since 1980, when its first bat reserve was acquired in Devon, VWT has been active in bat conservation in Britain and Ireland and also more recently in mainland Europe. A particular focus is on the protection and enhancement of roosts for rare bats, notably the horseshoe bats, and the Trust currently manages nearly 40 roost sites in Britain and Ireland. With legal protection and intensive long-term conservation effort, by VWT in particular, the number of greater horseshoe bats is increasing. We have seen a threefold rise in the population, from a 1980s low of around 4,000 to the population size of around 13,000 today. But given that, by some estimates, the population of greater horseshoe bats in Britain in 1900 was around 300,000, there is still a long way to go.

Which makes the recent discovery of a small pioneer colony in a derelict stable block in West Sussex extremely exciting 100km east of known colonies in Dorset for the first time in 100 years. It is a promising sign that greater horseshoe bats are expanding their range and are no longer completely absent from their former locations. It also suggests that there is still potential for them to re-establish in this part of Britain. Such discoveries need to be acted on urgently and VWT, together with Sussex Bat Group, is raising funds to secure the building as a safe haven for greater horseshoe bats and to increase their chances of thriving and further expanding their population. Find out how you can help the Sussex Bat Appeal.

What else can we do to aid this recovery? It’s evident that protecting and enhancing roost sites has played a vital role thus far, but we are increasingly interested in what is happening in the wider landscape at much larger scales. Much of the information we have on the population trends of greater horseshoe bats relies on roost monitoring data, but these sites are lacking in the eastern parts of their range. In order to figure out whether this species might be able to recover in the southeast, we need to know whether the habitat is suitable to support them since the landscape has surely changed dramatically since the species was present there in any great number.

As well as suitable summer and winter roosts, greater horseshoe bats require a network of suitable foraging habitats, primarily broadleaf woodland and cattle-grazed pasture, connected by corridors of linear woody vegetation that are unpolluted by artificial light. More recently, it has been shown that noise pollution from road traffic can also inhibit foraging activity. By using maps of landscape features and land-use types, we are able to quantify these factors to generate spatial models that predict the extent and location of suitable habitat based on the location of existing records of greater horseshoe bats. 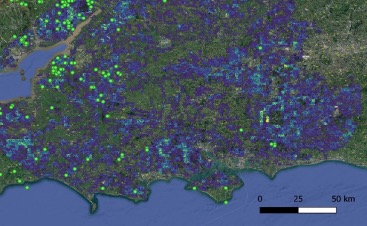 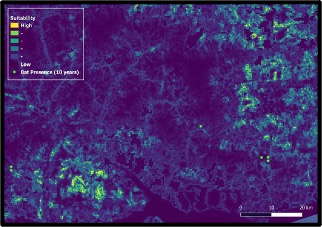 Our initial modelling work shows there is suitable habitat in eastern counties, but large gaps in contiguity

These kinds of predictions show different parts of the landscape with the potential to support greater horseshoe bats alongside areas of unsuitable habitat, which may impede dispersal. Large swathes of arable land with poorly developed field boundaries and few trees are more difficult for greater horseshoes to navigate and, therefore, these areas show up as low suitability, as do urban areas with lots of lighting. Conversely, well vegetated riparian corridors, broadleaf/mixed woodland and cattle pasture show up as areas of high suitability where they cover a high combined proportion of the land.

These tools allow us to focus our groundwork to look for new records of these bats in areas where the habitat is better. They can also help us to work with local landowners to improve landscape features at the edge of the current range and potentially to develop or improve roosting sites. With so few roosting sites known in the eastern counties, it is vital that we do what we can to protect any remaining roosting sites, however small. Without safe roosting sites, it is impossible for greater horseshoes to recolonise this part of the country.

Over the next few years, we hope to work closely with other conservation organisations, volunteers and landowners in Southeast England, so that we can facilitate the return of greater horseshoe bats and safeguard the future of this recovering, but ultimately still rare species.

Find out more about the Sussex Bat Appeal and how you can help.