Last year we did ‘a year in the life’ of one of our much-loved translocated martens, ‘Miss Piggy’. She managed to make herself a firm favourite with all of the PMRP staff over the first year as she was so well-behaved and followed the expected patterns of a newly translocated animal – unlike some of the other released martens…

PM16 has been one of our most tricky animals and has really kept us all on our toes. As she explored her new home, it sometimes felt that she was visiting all of Wales before deciding where she wanted to settle. Here are some of her highlights.

The week PM16 arrived was perhaps one of the toughest the PMRP team had faced since the start of the translocations. Both in Wales and in Scotland we were really feeling the fatigue of the, by then, eight weeks of non-stop marten translocation and tracking. PM16 arrived along with PM15 in the early hours of the 3rd November, with an escort of some NRW employees who were excited about the project and wanted to witness the return of a native species to Wales. This pair were christened by the drivers as they were being transported down as Bob and Elaine after the forest they were trapped in; Boblainy Forest. It had been a long few weeks for the team and, according to the drivers, late-night transports don’t encourage much creativity for naming. The Welsh team were particularly drained, as the day before had been the hottest November day on record in Wales at 22.4°C, and trying to build and furnish a release-pen to make it marten friendly in that weather had been something of an experience. To add to the taxing day, the marten van used to transport the animals didn’t quite have the ground clearance needed to make it down the particularly rough forest track to that week’s pens – and ended up having to be pushed out. Despite the obstacles, both Bob and Elaine made it safely into their release pens and we left them to explore in peace.

Elaine, along with Bob, was released in the evening on the 7 November and the weather could not have been more different to that of their arrival day. Torrential rain and high winds made keeping track of these two very tricky. Add to this a day of illegal fox hunting around the release area and we were exhausted. Very sadly, less than a week after release PM15 was found dead and his post mortem revealed the cause was fungal encephalitis. We waited with baited breath to see if PM16 would succumb as well but she continued to explore her new home and make some large exploratory movements, so all seemed well. With the arrival of the final four martens of Phase 1 (all in one week!) we were pushed to our limits and by the end of November PM16 was officially AWOL.

As the weather began to get colder, the PMRP team managed to have some respite from the large movements being made for the past month by our martens as they settled down for winter. This allowed us to play catch up and track down all of our missing animals, and a week into December we managed to work out where PM16 had hidden herself away. She had settled in a lovely patch of woodland near Strata Florida, a few kilometres south of her release site, and we started to find some fabulous natural den sites that she has been utilising.

Despite her initial large movements PM16 worked her way into our good books in January when our trustees came to visit the field side of the project. We were quite anxious that all of the martens would play hide and seek whilst we had an audience, but PM16 was a star and gave us a perfect den site to show the trustees.

Throughout February she left her relatively established den sites and continued moving south into the Tywi forest. At first we were disappointed she had moved, as we had previously been convinced she was relaxed and settled enough to have kits, but on reflection we actually decided her movements were a good thing: perhaps prompted by a desire to find a suitable maternal den site. Her personal record came one night in February when she travelled 8.2km in a single day! We wouldn’t have believed she could have travelled so far if David Bavin (PMRP officer) hadn’t fixed her on two consecutive nights so far apart.

As snow fell she returned back north to her old haunts around Strata Florida and re-used many of the same den sites she had previously occupied. We think the bad weather forced her to restrain her wandering in favour of tried and tested hunting grounds. In the hopes she may return, we had littered the area with a number of brand new den boxes that we had laboriously winched up trees for her and PM11 (who had the adjoining territory). Of course, in true pine marten style, she didn’t use a single one, but we felt smugly confident that she was about to give birth regardless: this wandering followed by settled behaviour was being mimicked by another of our females (PM02) who we had a close eye on. And then, just when we thought we had a handle on her, she disappeared, seemingly overnight, only to resurface in Rhandirwyn over 13 miles away a few days later. We found her denning in dense wind blow, a far cry from the beautiful ivy covered oak tree in which she had previously been resident. After this she continued moving south and by the end of the month she was showing no signs of settling down; we concluded that perhaps the translocation had been too stressful for her to give birth this year.

April brought some exciting footage of PM16 because it was the first time in Wales that there had been a clip of a pine marten and a red squirrel in the same spot, from the same camera on the same day. There was also a roe deer just to increase the native species count! It seemed a nice way to show the true native wildness present in mid Wales. After this clip was recorded, she then continued her vast wanderings all over mid Wales, until we finally caught up with her in a disused owl box in a tiny patch of private woodland just outside Bwlch Y Geuffodd gardens. Gay and Jim (the owners of the garden) very kindly offered to host some cameras in their gardens and we got some beautiful footage of Elaine enjoying her new home. Her settled nature here for several weeks (in contrast to her flighty behaviour normally) even made us revise our earlier judgment that she had not had kits.

On the 12th May, we had a 3.30am start to try and visit PM16’s den site whilst she was out foraging, to check if she had given birth. By this point any kits would be around six weeks old and can be left by their mother for short periods. When we arrived at the site happily PM16 was already out foraging (in contrast to our 12 hour wait to check PM02’s den) and so we immediately headed up to the owl box – and low and behold we found a single beautiful kit curled up inside.

Sadly, around a month after this PM16, along with her kit, disappeared. For the next few months the efforts of the team were taken up with trapping the first year animals to remove collars and the arrival of a second tranche of martens that had to be kept track of. Although we did manage a few far range bleeps from her collar that gave us hope she was still alive.

Then, finally, in October David managed to relocate PM16 south-west of Llyn Brianne in a den box that had been put up four years ago by David himself along with forest manager Huw Denman. PM16 couldn’t have picked a nicer, friendlier spot, and this meant Huw could bait traps for us to prepare for her collar removal.

Almost a year to the day since she was first released into the Welsh woodlands, she was re-trapped and her collar was removed. She was a healthy weight and seemed to be no worse for wear from her many adventures all over mid Wales. We decided amongst ourselves that this would probably be a marten we could no longer keep track of now her collar had been removed. She had been difficult to stay on top of even with her radio collar on, so we suspected she would now be impossible to find if she decided to move.

Happily though she surprised us all once again by staying put (maybe she just really took a shine to those four year old den boxes?), and Huw regularly kept us up-to-date on her progress as he caught camera trap clips of her out and about in his woodland.

Her crowning glory came just last month when Huw spotted her, along with three kits, in a tree with a den box. Huw subsequently set up a camera and was able to capture some amazing footage.

These were our first truly Welsh-born kits – they would have be conceived in Wales last summer. This has been an absolute ‘champagne moment’ for the team, as it shows that pine martens are undoubtedly happy, healthy and breeding here in mid Wales, and that they are hopefully here to stay! 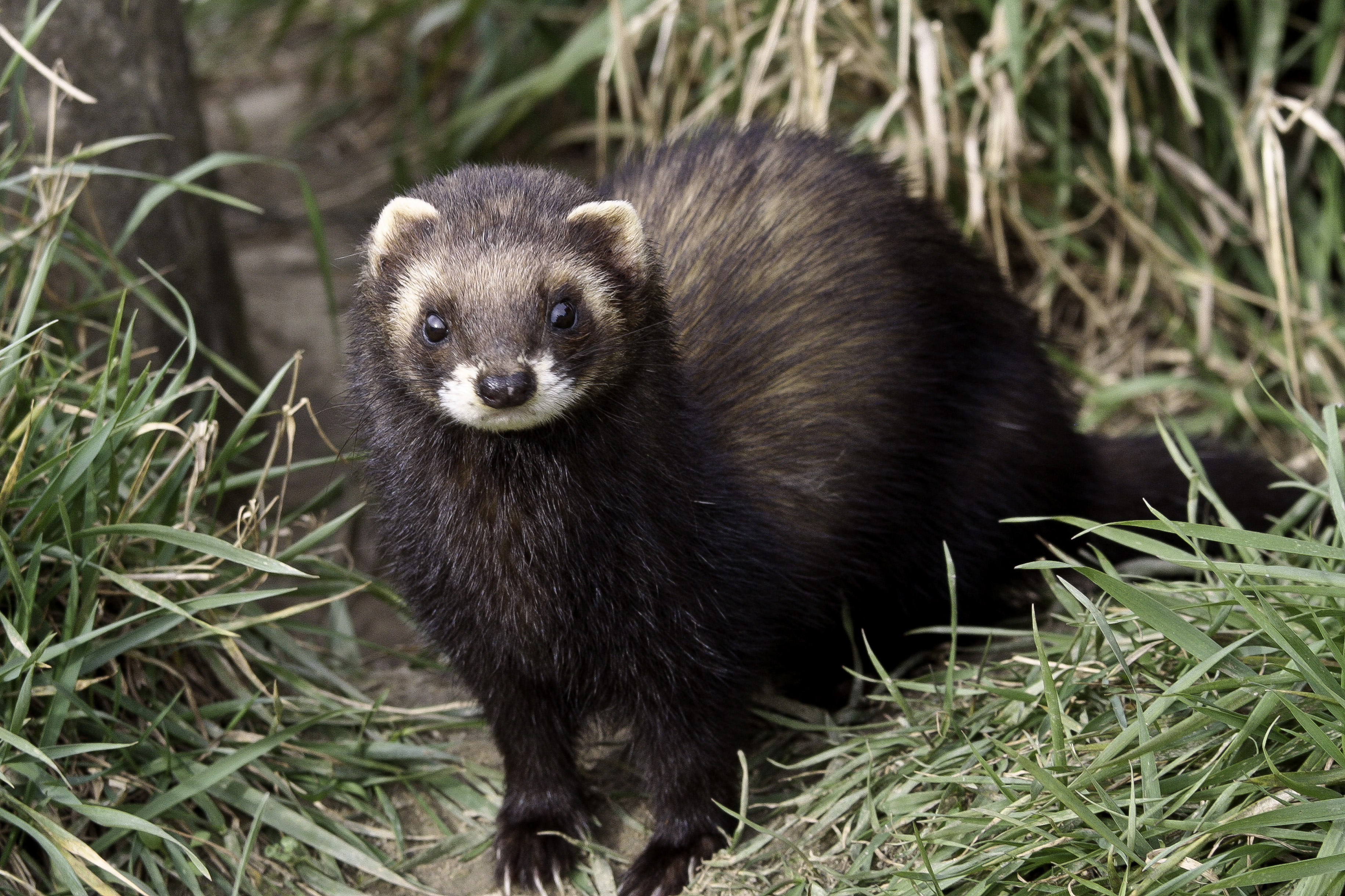 The puzzle of polecats in Scotland 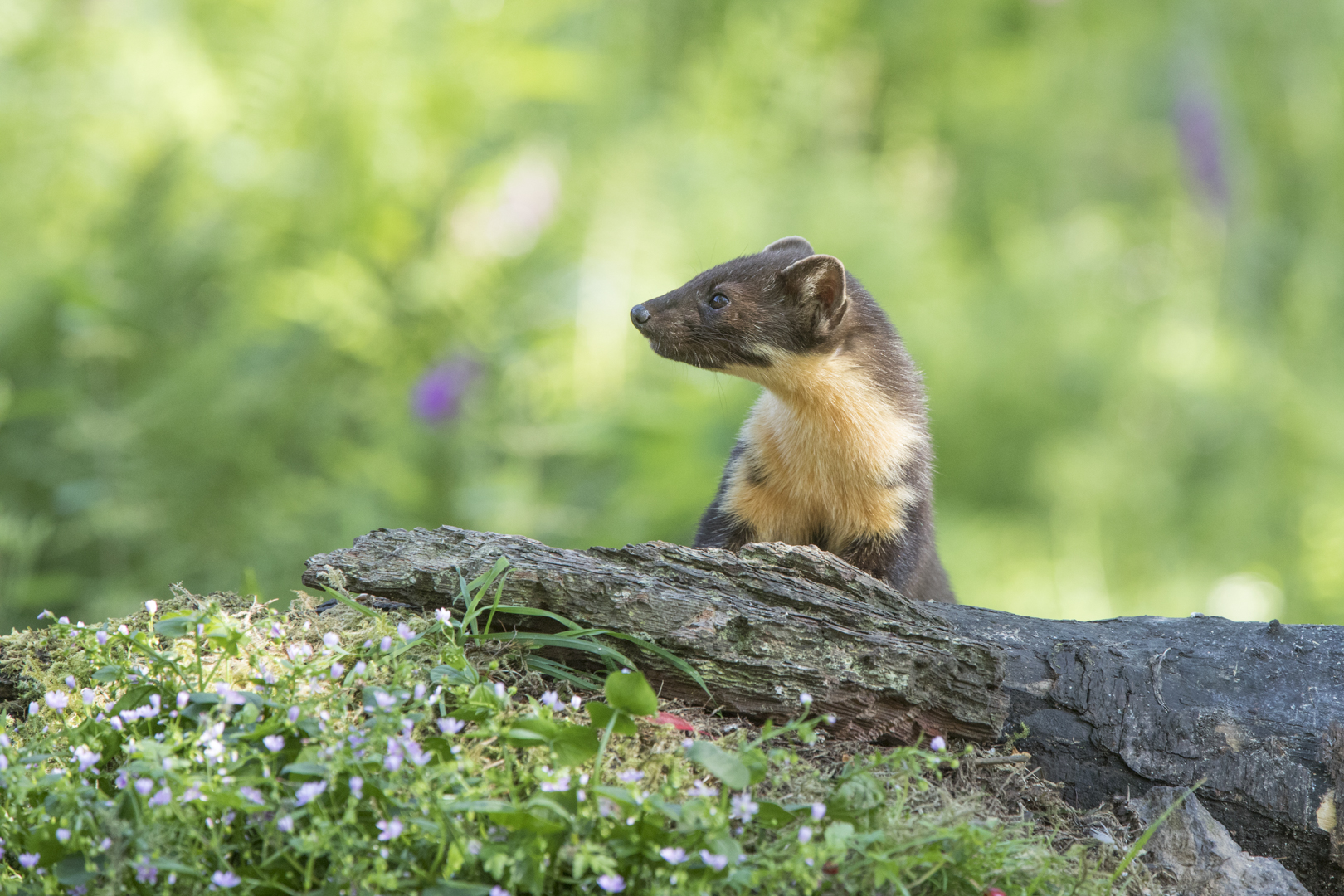