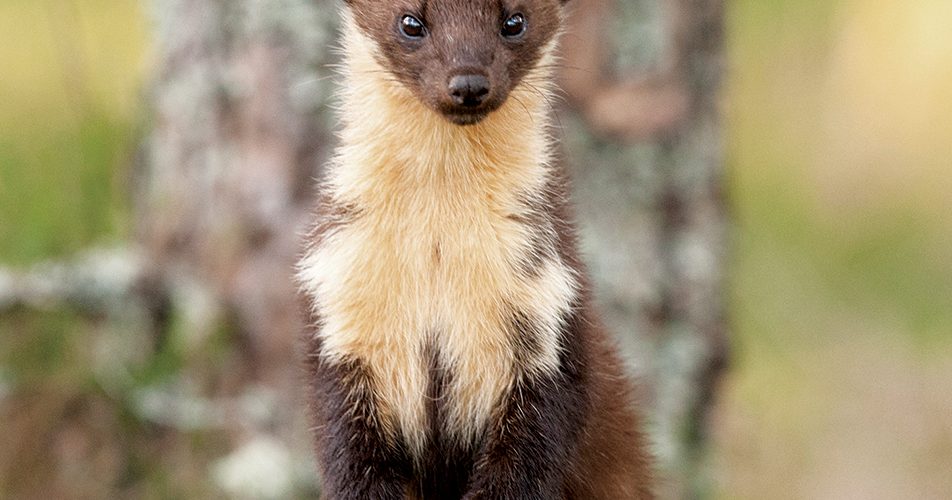 Britain’s first carnivore recovery scheme on a nationwide scale is underway. Native pine martens from Scotland are beginning a new life in Wales, and more are on the way.

Leading this project is The Vincent Wildlife Trust (VWT), a charity with 30 years’ experience of pine marten research, and today the Trust is delighted to announce that the translocations to Wales have started.

The VWT’s Pine Marten Recovery Project has involved meticulous planning by a charity renowned for its expertise with this elusive mammal – a mammal that carries the title of Britain’s second rarest carnivore after the wildcat.

Pine martens are thriving in Scotland, but in England and Wales the pine marten population is in danger of extinction. To help Wales’ marten population recover, the Trust aims to translocate 20 pine martens to woodlands in mid Wales, with a further 20 animals next autumn. This number should result in a self-sustaining population that over time will spread to other forests of Wales and across the border into England.

Natalie Buttriss, VWT’s CEO said ‘My team of mammal conservationists has been working tirelessly over the last two years to make this happen. We have left no stone unturned to ensure that our approach is rigorous, and we have involved a wide range of people in the planning of this project including numerous experts in the field of mammal conservation. In our many conversations, we have been boosted by the positive response and support we have received at every stage of the project’s development.’

At the time of the First World War, pine martens had simply disappeared from almost all of southern Britain. Those that remained had found refuge in the North-West Highlands of Scotland and in tiny pockets of the uplands of northern England and Wales. This disappearance was principally a result of predator control associated with the increase in popularity of game shooting coming on top of the loss of so much of Britain’s mature woodland – the favoured habitat of the pine marten. Today, the pine marten is making a good recovery across Scotland. South of the Scottish border, however, the situation is far from rosy; there has been no convincing evidence of natural recovery.

The Trust has worked with many partners and experts to make the translocation project a reality. Scottish Natural Heritage has given the Trust a licence to catch the pine martens, Forestry Commission Scotland has permitted access to its land and the animals are being released under permit on land owned by the Welsh Government and managed by Natural Resources Wales. The release pens in Wales have been designed and built by staff from Chester Zoo, a major partner in the project. The Woodland Trust and the People’s Trust for Endangered Species are also key funding partners and many other parties are supporting the project in a number of ways including Wildlife Vets International for veterinary advice and supplies. The search for further funders and partners is ongoing for a project that is likely to cost in the region of £1.2million over five years.

In the final decades of the 20th century, the VWT played a key part in helping to bring both the otter and the water vole back from the brink. As the Trust celebrates its 40th anniversary this year, another of Britain’s native mammals in need has just been given a helping hand.