We’re delighted that Chester Zoo has won a Conservation Gold Award from the British and Irish Association of Zoos and Aquariums (BIAZA) for their work on our Pine Marten Recovery Project.

Chester Zoo is a major partner in The Vincent Wildlife Trust’s Pine Marten Recovery Project. To help Wales’ pine marten population recover, the Project has translocated 51 pine martens to woodlands in mid-Wales over the past three years. Chester Zoo was integral to the translocation and releases and played a major part by constructing and installing release pens for the pine martens.

Sarah Bird, Chester Zoo’s Biodiversity Officer, said: “I am thrilled that our work with the Vincent Wildlife Trust to help pine martens has been awarded a gold award by BIAZA. It is an exemplary project that is really setting standards for reintroductions of carnivores in the UK. It has been a pleasure to work with VWT and other partners on this charismatic and beautiful native British mammal – well done everyone!”

To find out more about our Pine Marten Recovery Project, visit the project website. 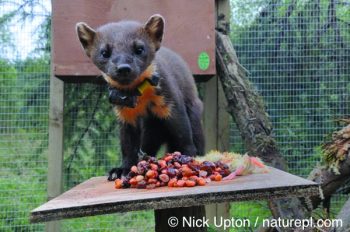