Britain’s population of around 13,000 greater horseshoe bats (Rhinolophus ferrumequinum) was until recently restricted to south and west Wales and south-west England.

As its population has started to recover, individuals and small colonies have been recorded as far away as North Wales and Sussex. Unlike the lesser horseshoe bat, it is absent from Ireland. 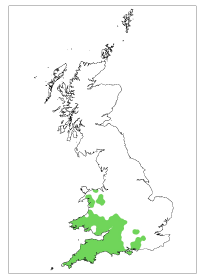 Number of young: One born late June to the end of July.

Diet: Moths and larger beetles such as dung beetles and cockchafers.