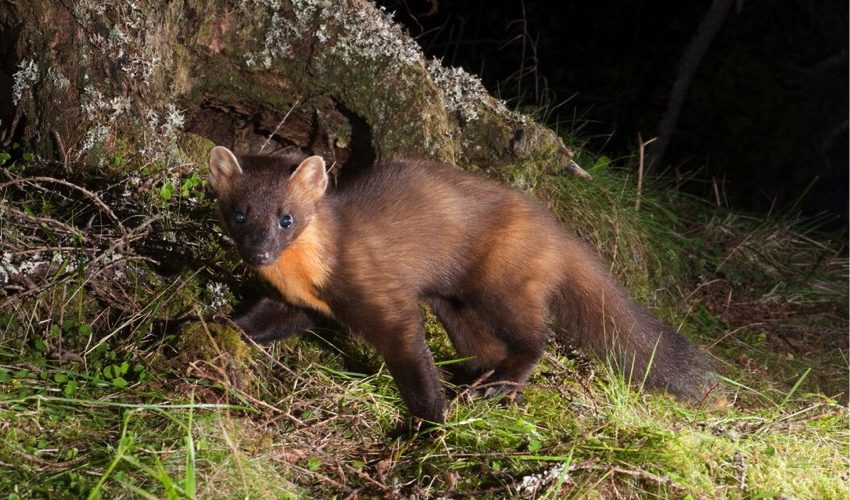 After the excitement of finding our first Welsh born pine marten kits in early summer, there was more good news. Josie, our Field Assistant, managed to track down another female, PM13, who had moved a little way north of the release area. Josie put some baited cameras out to check on her and was rewarded with footage of PM13, together with her very large and boisterous new kit.

This meant that at least half of our remaining females successfully bred in the first year, which is a huge bonus. Once the kits were weaned, we were able to start re-trapping the adult martens to weigh and check them and remove their radio collars before the batteries ran down. We expected some animals to be easier to trap than others and this proved to be the case. PM07, affectionately known as Miss Piggy, has been very food motivated since we first met her in Scotland. She was seen to take not only the supplementary food that was put out at her release site but also what had been put out for some of the other martens that were released after her. Predictably, she was one of the three animals re-trapped on the first day! Some of the others were rather more challenging, but we have now retrieved thirteen of the twenty collars from the first batch of animals. All of those re-trapped so far have been in good condition and have put on weight since their release.

The summer seemed to fly by, and soon it was time to begin trapping and translocating the next tranche of pine martens from Scotland. Lizzie and I headed north in the middle of August to set out the first trap sites and begin pre-baiting ahead of trapping commencing at the start of September. We were extremely lucky to have the help of some keen local volunteers, including Matt Wilson, Lewis Pate and a team of trainee rangers from the Nevis Landscape Partnership (see right). We also welcomed Karis Hodgson to the trapping team this year on her first trip to Scotland.

Trapping began in earnest at the beginning of September. On arrival at the house (called “Pinewood”) that was to be our base for the next few weeks, we noticed a fresh pine marten scat outside the front door, which we took to be a good omen. This turned out to be from a pine marten that was resident in the woods behind the house, and, according to the house owner, could be a bit of a nuisance and often went through the bins – until marten proof lids were fitted to the bins. We never saw the marten doing this, but Henry Schofield, our Conservation and Science Manager, set up one of his cameras for a few nights and took some lovely photographs of it.

After helping the team from Chester Zoo to put up the soft release pens, Dave and Josie took a break from preparing the Welsh sites to come up to Scotland for the first round of trapping and to transport the first batch of martens back down to Wales. These came from the Morvern peninsula, which meant that the start of the martens’ journey to their new home involved a short crossing on the Corran ferry.

Trapping went very well throughout September, with the exception of a couple of minor hitches. At one site we had to move the location of some of the traps that had been disturbed during pre-baiting and, on checking our cameras, found that the culprits were wild boar. Another day we arrived to re-bait and there was a music ‘rave’ going on in the forest, fortunately away from where we planning to trap, but the music could be heard from some distance. Luckily, it didn’t seem to have deterred the pine martens from visiting our traps, as the bait had gone from most of them. By early October, we had safely translocated another nineteen martens (nine females and ten males) to the release sites in Wales, and then the hard work of keeping track of all of them began.