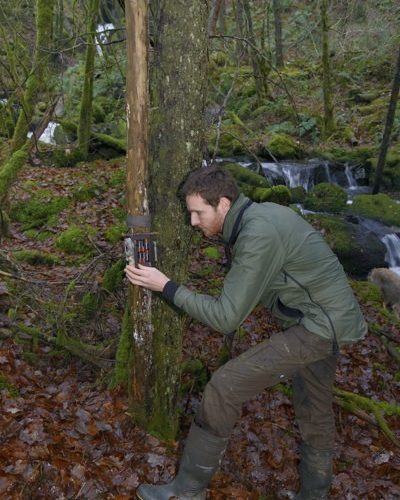 We have asked our PhD students to write a series of blogs about their research. This is the first in the series and written by the VWT’s Pine Marten Project Officer and part-time PhD student David Bavin.

It’s hard to know where to start with this blog about my PhD research; I started in April 2015, and since then have barely had time to breathe. My research is intimately entwined with our (The Vincent Wildlife Trust’s) Pine Marten Recovery Project, which involves translocating 40 pine martens from Scotland to Wales over two years. We are halfway there – 20 martens were bought down in autumn 2015, and we have had feet on the ground keeping track of their fate since then. Translocations are becoming increasingly popular as a conservation tool to fortify or re-establish populations of endangered animals. Hitherto, the outcomes of translocation efforts have rarely been scrutinised by scientific method, and there has been a lack of hypothesis-driven research to try and understand the mechanisms affecting their outcome. The aim of my research, broadly speaking, is to provide information that will ultimately improve our understanding of how to best go about a translocation operation, whilst also investigating the adaptive behaviour/ecology of the pine martens’ response to the process.

Pine martens have character; for anyone who has watched them, and known different individuals, this is undeniable! However, character difference is tricky to quantify empirically. I am particularly interested in the boldness/shyness axis of behaviour, and whether I can develop a number of behavioural assays that can be employed to recognise variation between individual pine martens, for this likely has a bearing on our translocation. Research on kit foxes, wood mice and weasels suggest that bold individuals incur higher mortality than ‘shy’ individuals, which make them less suitable as translocation candidates. I have been gathering thousands of video clips of ‘our’ martens during the pre-baiting phase in Scotland; at capture and then during their period in the soft release pens. Fortunately, I have been developing a citizen science project with our partner the Woodland Trust, which will involve WT volunteers sifting through the footage and identifying clips with martens in, saving me an enormous amount of time. Using this footage in conjunction with some more prosaic metrics (latency to leaving travel crate, latency to leaving pen etc.), I hope to identify whether there is variation in the martens’ boldness/shyness (or neither!), and whether this has any bearing on their post release movements, adaptive strategy and fate.

I have also been collecting scats from the martens every day during their time in the pens. I intend to look at the faecal cortisol concentrations (indicative of stress response) in collaboration with Chester Zoo, and investigate whether this changes during the time that the martens spend in the pens. There may also be variation between individuals, or perhaps we will not have the sophistication to be able to detect an appreciable difference. Perhaps a variable stress response is linked with character, and also plays a role with post release behaviour and fate? Intuitively, I feel it should, and the challenge for me is to substantiate or refute this with evidence. I won’t take the samples into the lab until our second tranche of releases has been completed, when I will have a more robust data set.

I have also been prodded down the gangplank (by Robbie McDonald, my supervisor at Exeter University) and plunged into much less comfortable waters…social science! I am investigating local people’s perceptions of the pine marten and our translocation programme. I actually find this area of conservation fascinating, and understanding and dealing with human/wildlife conflict is, in my opinion, the most crucial element of this type of work. I am using Q-methodology to do this, which has recently been employed in human/wildlife conflict scenarios as a method to identify specific grievances and trajectories within a general conflict narrative. It has been employed in case studies on grizzly bear and grey wolf conflict in the USA, predator/livestock conflict in Namibia and the Pyrenees, and as a tool for refining wildlife management in Norway. To begin with, I set up informal interviews with 12 local people who represented a wide spectrum of opinion, from obviously pro to very negative. I then isolated statements from these interviews, (including such choice snippets as “the pine marten is vermin”!), and created a concourse of statements (30 in this case), or in Q jargon, my ‘Q-set’. These statements are preserved as closely to verbatim as possible, and presented to people who take them at face value, can discuss them, and then arrange them in an array based on how strongly (or not) they agree or disagree with the statement. There are a set number of spaces for the 30 statements, and the array is arranged like a pyramid; there are lots of slots in the middle where there is ambiguity, and this tapers to either side until there is only one slot for the most strongly agreed or disagreed with statement. When this is complete, I have my data array, and can (eventually) conduct some analysis to tease out groupings or commonality in the data. This will hopefully inform our future communications and engagement strategy, and will enable us to really target what people value, or are concerned about with our work in the area.

I look forward to updating everyone when I have had a chance to process some of the data I have accrued. But for now, there are pine martens that require our watchful presence, and with luck, kits that must be welcomed – our first Welsh born animals, a major milestone.