‘Why are you researching the poll tax’? is just one of the questions that I have been asked when explaining what I do. Or a more usual first question is: ‘oh, pole cats. Is that like a wild cat…actually, what are they again’?

It is testimony to the elusive nature of the polecat that one of our country’s charismatic mammals remains a mystery to so many. The polecat (Mustela putorius) is a medium-sized carnivore in the mustelid family and the genetic ancestor to the domestic ferret. They have a dark coat with a lighter under fur and a distinctive bandit-like white face mask. Adults range between 850g and 2kg in weight and are usually active between dusk and dawn. In the past they were notorious for their pungent defensive stink, which they release when threatened. Once extremely common across Britain, polecats were almost eradicated during the 19th century. The Vincent Wildlife Trust has been tracking the changes in their distribution since the 1990s and its most recent survey has found that polecats have now recolonised almost the whole of England and Wales. In a time when conservation success stories are thin on the ground, polecats have been making a quiet comeback with relatively little human intervention.

‘If they’re back, why do you need to study them’? is often what follows. It is a good question, and one that just over a year into my PhD, I now feel more qualified to answer. Considerable effort has gone into understanding more about these charismatic critters in the last 30 years, but there are still gaps in our knowledge regarding threats to their survival today. We know that there are a variety of anthropogenic hazards that they may experience – ranging from roads to exposure to rodenticides – but we don’t know how they interact with them, or which they are more likely to encounter based on their behaviour. As a returning predator, polecats may provide insight into the realities of living with another carnivore in modern times, which is important given the recovery of other mustelids such as the pine marten and the current interest in rewilding. Understanding more about their successful recolonisation may provide lessons for conservationists seeking to re-establish other species. And, from a personal point of view, there is something delightful about researching an animal that is charismatic, aromatic (!) and yet so secretive. It means that every hard earned scrap of information feels like it is worth double

So much to find out, so little time. After starting my PhD, I began with detailed desk research on the changes in distribution of polecats over time. There have been some extremely useful surveys carried out on the distribution of polecats in Britain, and my aim was to bring these together and see what we could learn from their changes in distribution. Secondly, I spent time in Edinburgh at the National Museum of Scotland, where Georg Hantke has been dissecting the polecats submitted as part of The Vincent Wildlife Trust’s National Polecat Survey. Thank you to everyone who submitted a carcass – they have been an important contribution to polecat research and their pelts and skeletons are being preserved by the museum. I then spent several months in the labs at the Centre for Ecology & Hydrology in Lancaster testing the polecat livers for exposure levels to rodenticides. This is a lengthy and painstaking process that involves four days of work to process just 12 polecat livers for 5 different rodenticide compounds. I am now in the midst of analysing the results – I’ll be able to report more about what we’ve found in a future post.

Most recently, I was lucky enough to carry out some fieldwork on live polecats this past autumn. The purpose of the study was to better understand polecat behaviour and foraging to quantify the hazards polecats face from human activities. Ably assisted by The Vincent Wildlife Trust’s Mustelid Conservation Officer Lizzie Croose, local expert Johnny ‘polecat-whisperer’ Birks and an army of fantastic volunteers from the Herefordshire and Worcestershire Mammal Groups, we were catching, radio-collaring and radio-tracking polecats in Worcestershire/Herefordshire. This involved early morning starts, a lot of walking in muddy fields to put out and set traps, climbing over barbed wire fences, lying down in hedges and trying (and failing) to avoid getting stinging nettles in the face, plus huge doses of optimism and plenty of tea and cake for when things weren’t going quite according to plan. In the end we caught six polecats in total and fitted them with radio collars. As well as fitting a collar, each polecat was sexed, weighed, aged, measured, micro-chipped and its general condition assessed. We were assisted with handling the animals by a local vet, Kari-Anne Heald who works at Companion Care in Worcester. One of the biggest challenges was fitting the radio collars – polecats’ heads and necks are the same width, which means it is quite easy for them to pull the collars off themselves, but if a collar is too tight then you risk it rubbing and irritating the animal. All of the polecats did eventually lose their collars and we retrieved them at the end of the study. 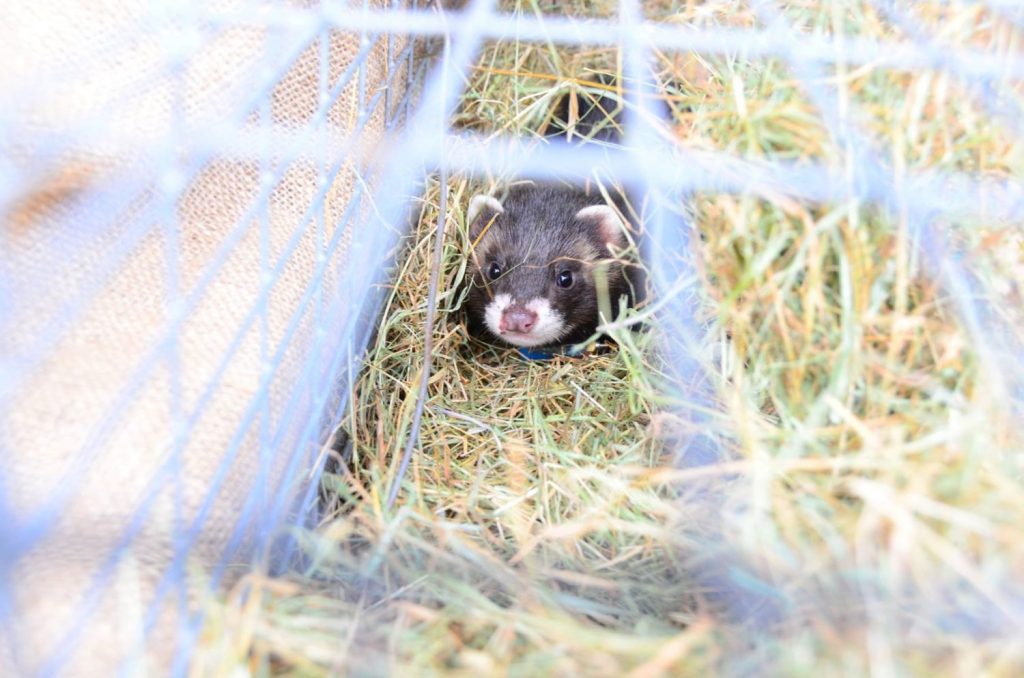 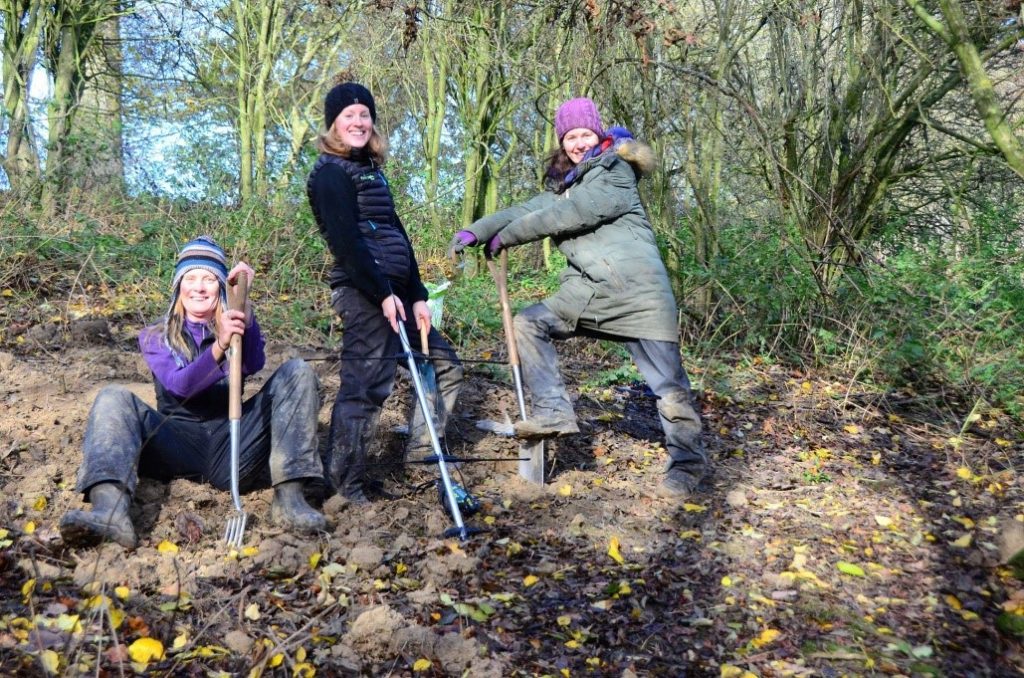 After the polecats were fitted with collars, they were released where we caught them from and we then used radio receivers to locate them at night. It was fascinating to see what they get up to and when they were active. We located den sites in rabbit burrows, recorded polecats crossing main roads and foraging in fields. There is something quite magical about standing in the cold and dark whilst listening to a signal from a polecat that is moving around in the field next to you! There were many unforgettable moments, but one of the most memorable was asking permission of a landowner to track a collared polecat in his garden. We had discovered its den site in the dark from the other side of a hedge and wanted to let him know what we were doing. It is understandably unnerving for people to see strangers walking in fields neighbouring their land with torches and large aerials at night so we had to be very mindful not to wander into a new area on the trail of a polecat without first obtaining permission!

‘Polecat, what’s that’? said he. ‘In that hedge there? But I walk my dogs past it every morning and evening and they’ve never noticed a thing’. Just another reason why studying these animals is so awesome – how amazing is it to know that a polecat could be quietly going about its business in a garden nearby and you wouldn’t even know it was there.

Katie’s PhD is co-funded by the University of Exeter, The Vincent Wildlife Trust and the Centre for Hydrology & Ecology. Her work on rodenticides is also supported by a grant from the People’s Trust for Endangered Species. Katie is the first student to receive the Vincent Weir Bursary for PhD studies, established in honour of the Trust’s founder.