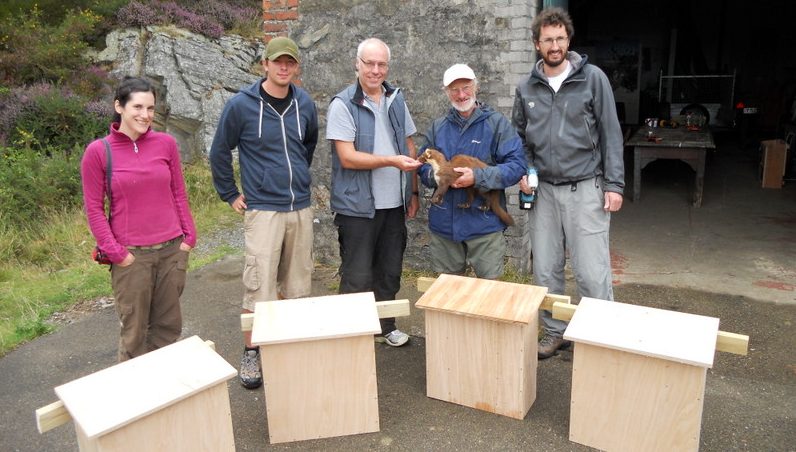 This is the last instalment of the blogs for the People & Pine Marten in Wales (PPMW) project, of which I have been proud to be the Project Officer for the last two years. The project, funded by the Co-operative Wales’s Welsh carrier bag levy, has been a resounding success, achieving what it set out to do: raise awareness of pine martens, engage more people in conservation, and take steps to implement a strategy for the recovery of the pine marten in Wales. I thought I would take the opportunity in to highlight some of the achievements of the project, and comment on what we will do next!

The project also set out to improve the habitat within forests thought to still harbour pine martens, through the erection of den boxes. These are important, as modern forests lack the diversity of structure and veteran trees in which pine martens would traditionally find denning opportunities. Not only that, the boxes act as sentinels, due to the propensity for pine martens to mark the boxes they inhabit by leaving droppings, or scats, on the roof. We have installed seventy of these boxes, striving to create a ‘stepping stone’ network of forest blocks with refuge sites, linking key areas in the Vale of Ffestiniog in Snowdonia with the vast Tywy Forest of Ceredigion and Carmarthenshire. I have yet to get round and check them all, but will be doing so over the next couple of months! The construction, installation and monitoring of the boxes has involved over fifty volunteers, who have learned about pine marten ecology (and carpentry in some cases!) whilst contributing meaningfully to the project. Those that built boxes independently have a GPS location for them, and are free to check on them when they wish. The advantage of the boxes is that they are temporary – they can be moved elsewhere when required, as they will be in the near future.

One of the key objectives of the project was to raise awareness – how can people care about something they have never heard of? The pine marten had slipped off the radar in Wales, despite its Welsh roots, due to its extreme rarity over the last fifty years. The project set about to rectify this and has made some significant inroads. We have had pieces on the pine marten published  in newspapers with local reach, but also in nationally distributed publications such as BBC Wildlife Magazine; the National Gamekeepers Organisation magazine); a feature on BBC Radio Wales’s Country Focus programme; an article in Natur Cymru; an episode in the S4C series ‘Welsh Nature’ with Iolo Williams. By the time the project has finished I will have given twenty two talks and presentations at various events with local and national reach. We also took pine martens on the road in the spring of 2013, visiting ten Co-operative stores throughout Wales to engage directly with their members. All of this has been invaluable in getting the message out that pine martens are a Welsh native, and precariously rare.

One of the motivations of the Roadshow was to gather responses for a public opinion survey that went live in the spring of 2013, designed to ascertain opinions toward a potential restocking in Wales as a conservation measure. This was made available online, and surveys were mailed out throughout rural Wales. The findings showed majority support of 91% for a re-stocking, with its native status and risk of extinction cited as the two main motivations for support. The survey also provided valuable demographic information on who was supporting this work, and where potential conflicts might lie. Concerns centred around the risk to other wildlife, birds and red squirrels in particular. The survey was a toe dipped in the water, but has given us direction and insight into where future community engagement needs to be targeted, and what information needs to be communicated.

And that is the next stage. The results of the PPMW project have fed into a thoroughly comprehensive feasibility study which outlines the case for a translocation of pine martens to reinforce the very low numbers present in Wales, facilitating a recovery. This is what we are currently working towards – putting the theory and recommendations of the feasibility study into practice. One of the most ambitious goals was to provide further evidence of pine marten presence in Wales. I threw myself at this, using the latest detection methods and utilising a willing volunteer base. Eight large scale volunteer surveys were carried out in Cwm Rheidol, Hafren Forest, Elan Valley, Llyn Brianne, Brechfa Forest, Crychan Forest, Dyfi Forest and Coed y Brenin. Countless kilometres have been walked in remote forest, with 77 potential scats sent to Ireland for analysis. Quality sightings were chased up on two occasions with a specialist marten detection dog, Luna (courtesy of Louise Wilson and Conservation Dogs). Camera traps were present in woodland with recent sightings or a recent history of occupancy, totalling over 15,000 hours of presence, and recording all carnivore species with the exception of pine marten and stoat. Despite a huge amount of effort, using techniques that we know work, we have been unable to provide further evidence of Welsh pine martens. We do still receive sightings however, some of which score very highly after our comprehensive assessment. We believe there are some animals out there, but that their numbers are so vanishingly low that a natural recovery is not going to occur. This further consolidates our current stance; active intervention is now required to save the species in Wales.Behind the scenes we have also been looking at which areas are currently most suitable for pine martens in Wales. My colleague, Dr Jenny Macpherson, has run a modelling tool (MAXENT) designed to assess the suitability of areas in Wales based on records of marten presence from Scotland and Ireland, identified through genetically verified scats & hair samples. The results were encouraging, and highlight a number of suitable areas.

The next stage will be to ground truth the outputs of the model, and apply our knowledge as ecologists to assess whether these areas have sufficient food, shelter and protection for martens, as well as considering the needs of other protected wildlife. A database of afforestation schemes throughout Wales has also been compiled, and current and future forestry trends have been researched to understand how forest cover and composition is going to develop in Wales over the next century. This includes looking at the effect of climate change, emergent tree disease, renewable energy development, and the government’s commitments through the Woodlands for Wales strategy. The conclusion from this is that conditions are now appropriate for a pine marten recovery: woodland cover is increasing annually; commercial plantations are to incorporate the needs of wildlife, diversifying structure and species composition; a warming climate is likely to facilitate faster regeneration of native woodland; clear fell is to be replaced where possible with low intensity management techniques; connective corridors are to be actively propagated. All of this will benefit woodland species in general, not just the pine marten.

So finally, I would like to thank anyone who has been involved with the PPMW project. After all, ‘people’ is a key component of the project title, and it is people that will ultimately decide the fate of the pine marten. I hope that you know a little more about pine martens now, and are excited by the potential to one day see them (or their poo) in Welsh woodlands!