While we may be preoccupied with Brexit, our fellow species, especially highly mobile species like bats, have no such awareness of political boundaries and their effect on freedom of movement. All in all, there are 53 European bat species that are found across continental Europe (from the Caucasus and Turkey in the east to the Mediterranean coast in the south) and also in the northern tip of the African continent. Some species are able to travel for hundreds of kilometres across regional and national borders.

Populations of Nathusius’ pipistrelle from Central Europe, north Scandinavia, the Baltics and Russia leave breeding grounds and move northeast to west/southwest for their winter roosts in the Netherlands, in France, Switzerland, Italy and even Britain and Ireland, with travel distances of up to 2,000km. Photo ©James Shipman

That’s why Eurobats, the Agreement on the Conservation of Bats in Europe, is such a significant and special conservation initiative, bringing together the 63 states over which European bats range. The agreement is an international treaty that provides the member states (and those who have not yet joined) with a framework for bat conservation to co-operate towards the conservation of bats throughout Europe. Such joined-up conservation is vital to stand any chance of halting and reversing the drastic declines in bat population numbers since the mid-20th Century. 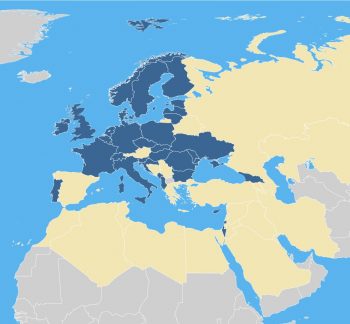 The range of the Agreement is shown in yellow, with those states who have already signed up in blue. Map: ©EUROBATS

The Eurobats Advisory Committee meets for three days each spring in different locations around Europe, with bat experts from the agreement area coming together to discuss how best to conserve Europe’s bat populations. This April, I was lucky enough to attend the 24th meeting of the Eurobats Advisory Committee as an observer in Skopje, the capital city of the Republic of North Macedonia.

The Advisory Committee is the scientific body of the Agreement. Together, representative bat experts from each country are able to agree and co-ordinate international research and monitoring initiatives, identify important sites for bat conservation, evaluate data and discuss scientific issues concerning bat research and conservation in order to set priorities for the Agreement’s future work. Based on the result of these monitoring activities, the Agreement develops and reviews recommendations and guidelines to be implemented by each country.

Bats have always had an image problem, largely through misconception and superstition, and so Eurobats is able to play another important role by raising public awareness of the value of bats and of the threats to their populations. Part of this role includes organising the annual summer ‘International Bat Night’, which will take place on the 24-25 August in 2019. 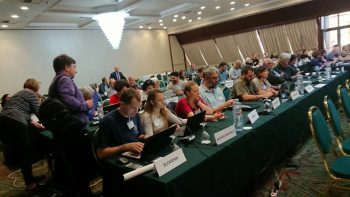 The Eurobats meeting in progress

The annual meeting includes a chance for each country to hold the floor, and update on progress made or to highlight issues of concern. For example, this year we learnt that the first Atlas on Bats of Albania has just been published, while in Estonia important new data has been collected regarding migration of bats over sea. This data will be used in, among other things, maritime spatial planning to help balance the ecological needs with the social and economic uses of the marine spaces. In Germany, the conflict between bat conservation and the expansion of wind energy remains acute. Studies are ongoing to find solutions, including the development of models to differentiate the seasonal activity of bats and their collision risk in different landscapes in order to inform turbine shut-down times.

Eurobats runs specialist working groups to progress conservation in a number of areas. This year’s topics under discussion included:

The meetings during the day are formal, the mood is one of professional cooperation, collaboration and working towards shared goals rather than competition, and a huge amount of progress has been made since it all started in 1994. However, many of the delegates have been attending for years and have got to know each other very well, and there is a very supportive family feel, with discussions continuing late into the evening alongside time to relax and socialise. I was made to feel very welcome and had the chance to talk to experts from all corners of Europe and beyond, including Saudi Arabia, Finland and Portugal. This year, quite a few bat experts attended from the UK, although sadly we were not officially represented by a Statutory Agency. One familiar face that I was delighted to meet again after 25 years was Professor Paul Racey, who I had first met at Aberdeen University whilst doing my PhD. Long since retired, Paul still attends Eurobats every year, and is currently leading the Public Health working group.

While the three days of meetings each year are held in the capital city, if you are lucky enough to have time to arrive the weekend prior to the meeting, there is usually an excursion laid on, giving a welcome chance to see some of the surrounding countryside. This year, we were taken to the nation’s most significant archaeological site, the ruins of the ancient city of Stobi, which can be traced back as far as the 7th century BC and contains many stunning mosaics.

VWT has been attending Eurobats for many years and has actively contributed to the working groups, including input to several of the very useful Eurobats Publication Series, including No. 8 Guidelines for consideration of bats in lighting projects, and No. 9 Guidance on the conservation and management of critical feeding areas and commuting routes for bats.

The Eurobats family keeps in touch between meetings, forming a strong network of colleagues to lend support and advice with ongoing work. This is particularly important for some of the developing countries, who often have conservation legislation at very early stages, and may lack both funding and expertise in their own countries. VWT collaborates with a number of Eurobats partners, for example the VWT bat team is currently working with Croatian colleagues to determine the distribution and ecology of Mediterranean long-eared bat in Croatia.

The membership of Eurobats is growing, for example Serbia has completed its accession to the Agreement in March 2019, while the Accession of Bosnia and Herzegovina is expected to happen in the near future. It is timely, therefore, that 25th meeting will be held in Sarajevo in spring 2020. 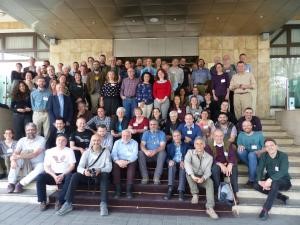 I’m not sure where we will be by the time we get to the 50th meeting. It would be nice to think that all 63 states will have signed up to the Eurobats agreement and the Brexit deadlock has been finally resolved!