blog > A winter in the USA

This winter, I was incredibly fortunate to take a three-month sabbatical from the VWT to work in the USA with the Michigan Predator-Prey Project. In early January, I headed across the Atlantic with bags overflowing with winter kit, ready to spend the season in Michigan.

The Michigan Predator-Prey Project, led by Mississippi State University and Michigan Department of Natural Resources, is investigating the role of predators, winter weather and habitat on white-tailed deer survival in the Upper Peninsula of Michigan. White-tailed deer populations are affected by a variety of factors, including food availability, disease, predation, weather and hunter harvest, and understanding how these factors influence deer numbers is important for informing effective management strategies. The project’s current study area is focused on the Ottawa National Forest in the Upper Peninsula of Michigan, just south of the stunning Lake Superior.

Working on the project was a huge change from fieldwork I’ve carried out in the UK. The winter climate in the Upper Midwest is cold by UK-standards (getting down to around -20°C) with a lot of snow, which brings challenges of numb fingers and things freezing. I also had to learn to ride a snowmobile for fieldwork; a process which involved falling off (a lot!) but is good fun when you manage to stay upright! Working in the forest was a fantastic experience and I never quite got over the novelty of seeing bald eagles every day or spotting fresh wolf tracks in the snow. 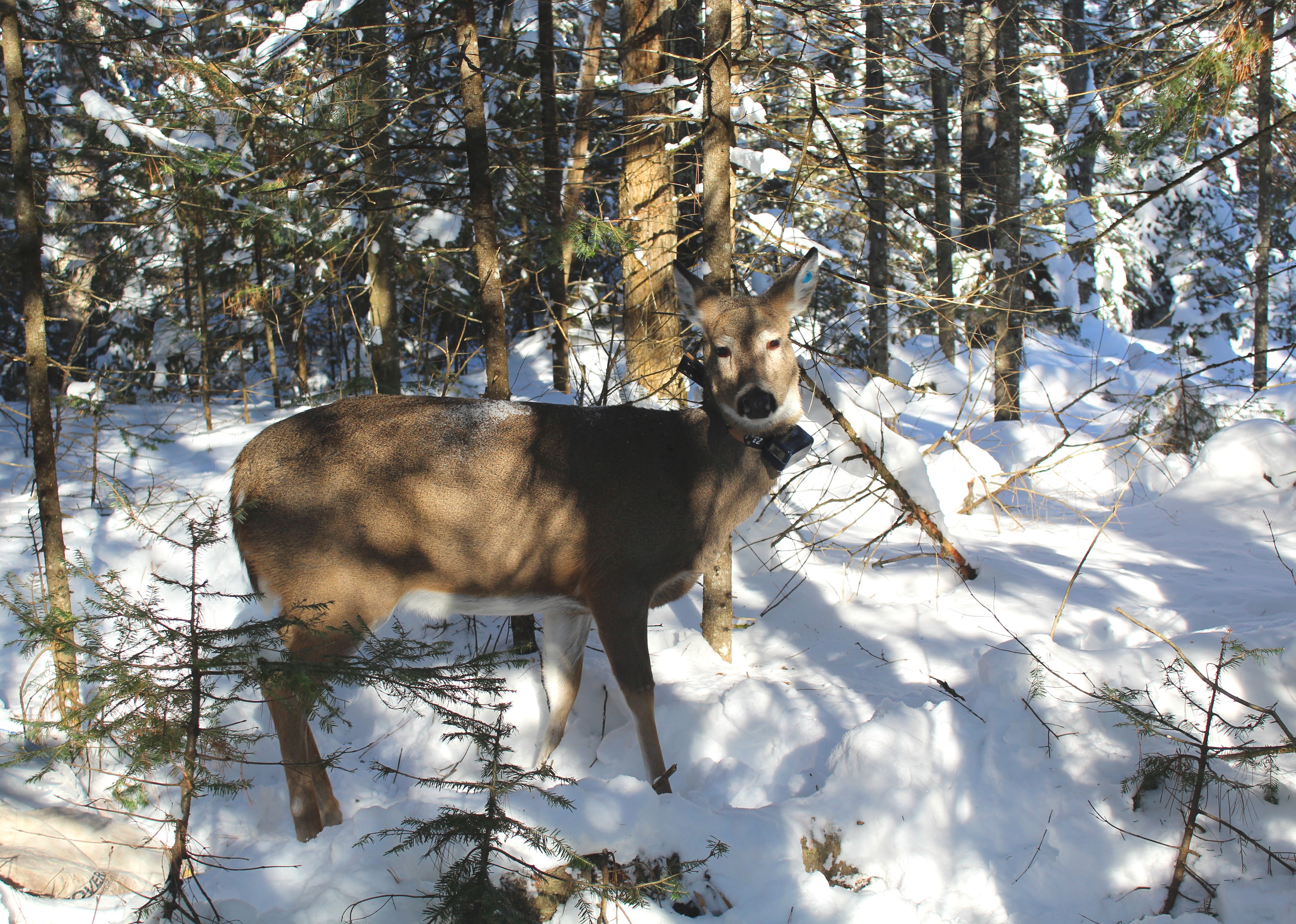 Much of the fieldwork during the winter involves catching white-tailed deer, with a particular focus on catching adult females (does), in order to determine their survival. Deer are caught in large collapsible traps baited with corn. When a doe is caught, she is immobilised, various samples and measurements are taken and an ultrasound is used to determine whether she is pregnant. If the doe is pregnant, she is fitted with a radio-collar to track her movements and a vaginal implant transmitter (VIT) which is expelled when the doe gives birth in the summer. This allows researchers to find her fawn. Fawns are also radio-collared to study their survival, as many fawns are killed by predators in their first few weeks of life. Deer of all ages and sex are fitted with ear tags so that if they are harvested by hunters, their fate can be recorded. When a doe dies, her radio-collar gives off a mortality signal and a mortality investigation is carried out to determine the cause of death. One doe we investigated had been predated and almost entirely eaten by wolves as was evident by the abundance of wolf tracks and scat at the site. Although we didn’t see the wolves, being so close to a wolf pack was really exciting. Over the course of the winter, 46 does were radio-collared and their survival, and that of their fawns once they give birth in the summer, will be followed over the next few months.

As well as studying white-tailed deer, the project also carries out a lot of research on the deer’s predators- wolves, coyotes, bobcats and black bears- and their resource use (habitat and prey). During February, we carried out den checks on black bears that had been caught and radio-collared last summer. This involved locating the bears’ dens underground and immobilising them whilst they were in the den (not something for the faint hearted!). Once the bears were immobilised, they were fitted with new GPS radio-collars and various measurements and samples were taken. This is also an opportunity to see whether the female bears have given birth during the winter. Most of the females had cubs and we were able to weigh and sex them and take a hair sample. As the cubs can’t thermoregulate by themselves whilst their mum is out of the den and being worked on, they must be kept inside someone’s coat(s) to keep warm! I was really lucky to be able to experience this one day. Standing in the snow with a bear cub tucked inside my many layers was a pretty surreal and special experience. I’ve now lost count of the number of people who’ve said ‘I can’t believe you got to hold a bear cub!’ since I’ve been back in the UK! 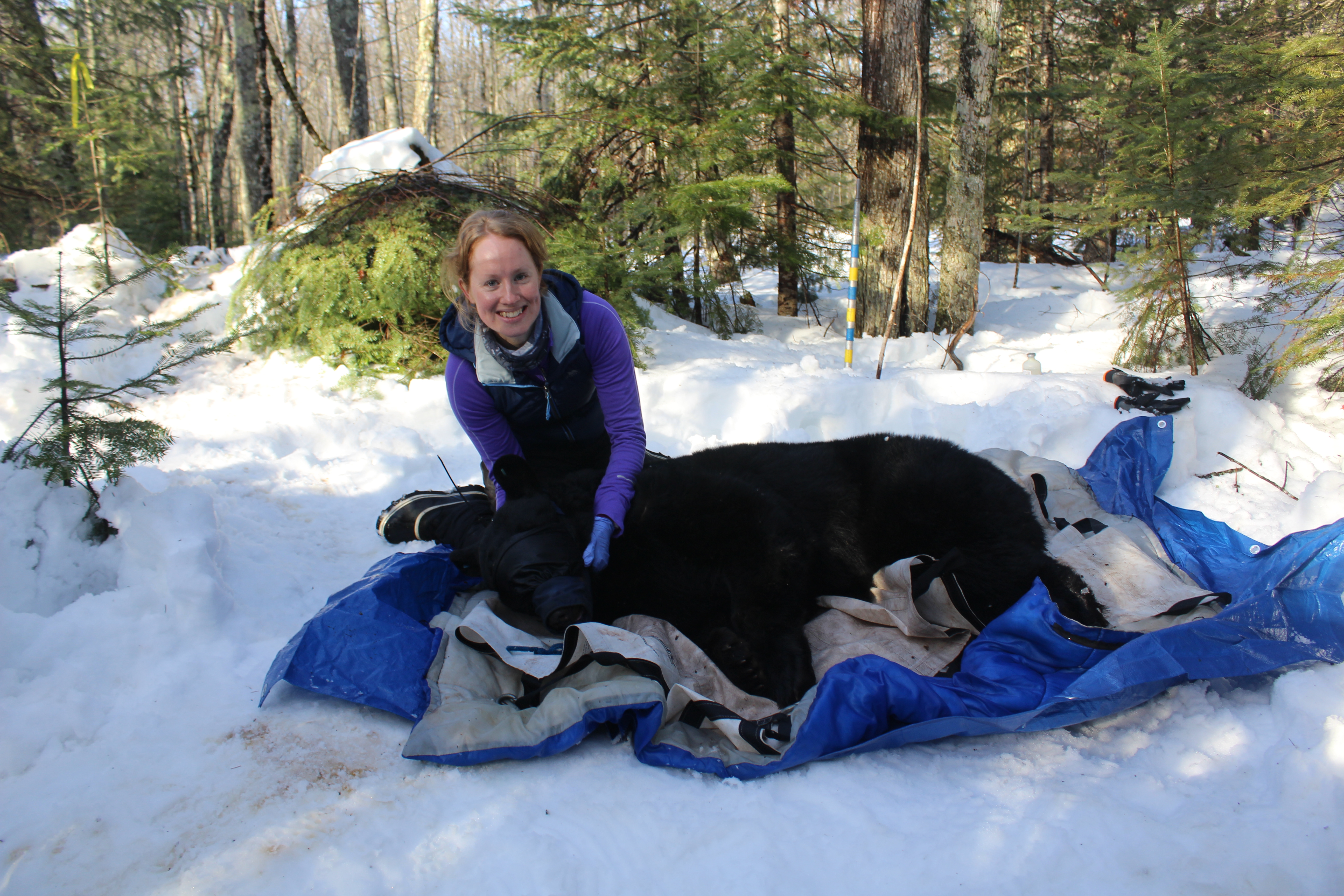 I also had the opportunity to experience aerial radio-telemetry. This involved flying in a small plane to locate radio-collared bears and download GPS data from their collars, giving us great views over the study area and a very lucky sighting of two moose! An amazing experience, but perhaps not recommended for people who suffer easily from travel sickness! 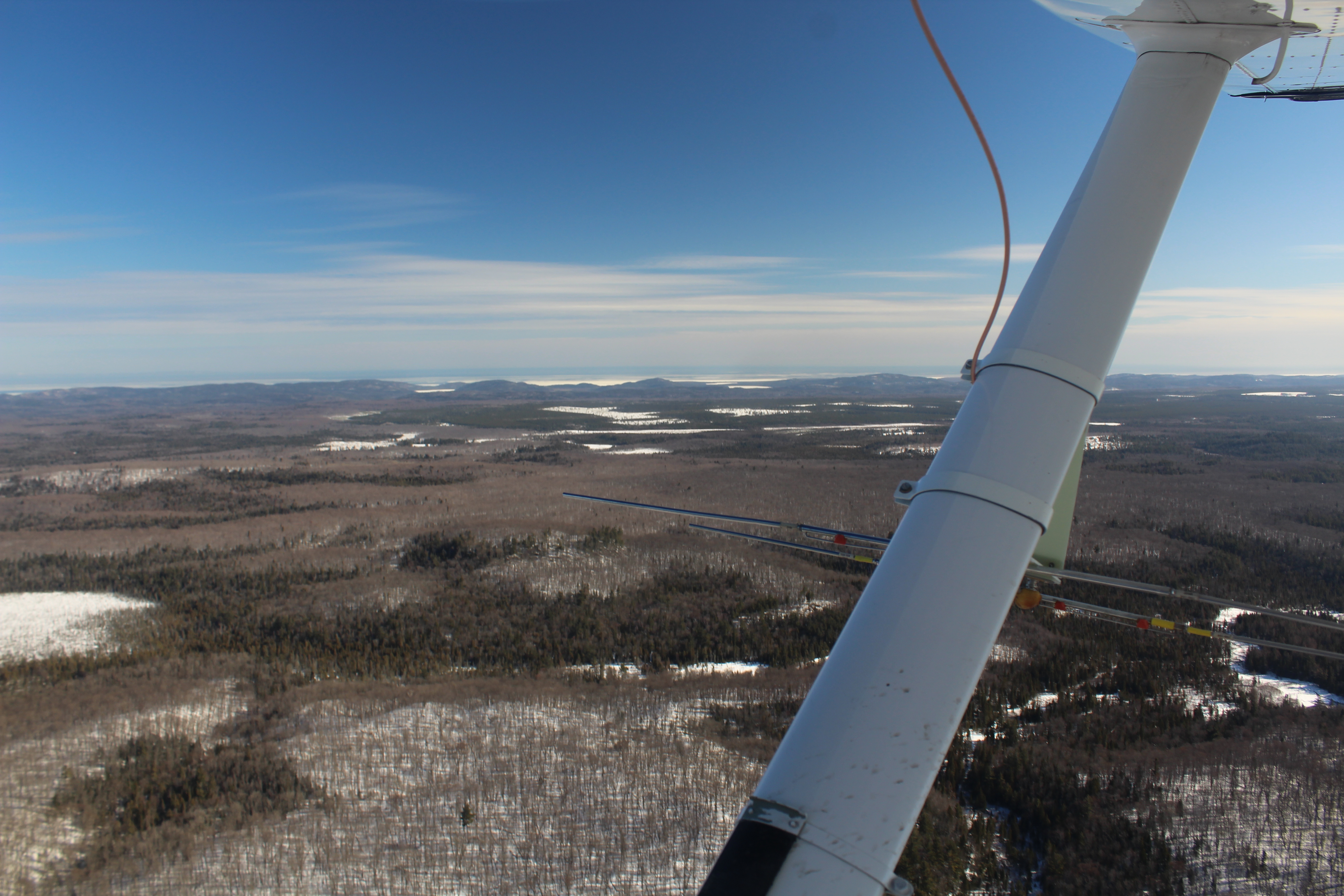 A view of the study area whilst carrying out aerial radio-telemetry. Photo: ©E. Croose

Another focus of fieldwork during the winter was carrying out a bobcat hair snare survey to estimate bobcat population abundance. Hair snare sites are baited with a deer carcass and ‘skunk junk’ (a scent lure that attracts a variety of carnivores and smells as delightful as it sounds!). The bait is enclosed by a corral and four modified snares that collect a hair sample from an animal when it walks through to access the carcass. A huge variety of species, including bobcats, visited the sites to take advantage of a free meal and these were recorded by camera traps.

We also set out cage traps to try to catch bobcats to fit them with radio-collars. Unfortunately we didn’t catch any bobcats but did catch a variety of non-target species (which was exciting for me as a ‘non-native’!), including raccoons, skunks, martens and snowshoe hares. 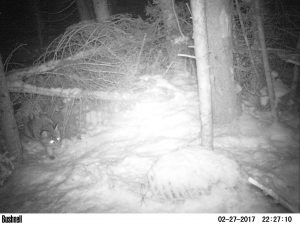 Whilst on the project, I also spent time working on some data the project had gathered on American martens (the North American ‘cousin’ of the European pine marten) and fishers (another member of the marten family and about three times the size of a marten). The project has amassed an impressive >18,000 camera trap images of martens and fishers visiting bait at bobcat hair snare sites and posing obligingly and photogenically in front of the cameras. As martens and fishers are ecologically very similar (using the same habitat and having similar diets), we are interested in how both species co-exist without one outcompeting the other and the mechanisms that facilitate this. Specifically, we’re investigating whether martens and fishers segregate either temporally (by being active at different times of day and night) or spatially (by selecting different habitat types). I’m still working on this and I’m really interested to see what results we get.

My three months on the project flew by too fast and as the snow melted it signalled the end of my American adventure and time to head back to the UK. The woods back home certainly feel a lot tamer without wolves and bears, but I have a whole lot of new experiences, some great memories and a few bruises to remind me of my time in Michigan!